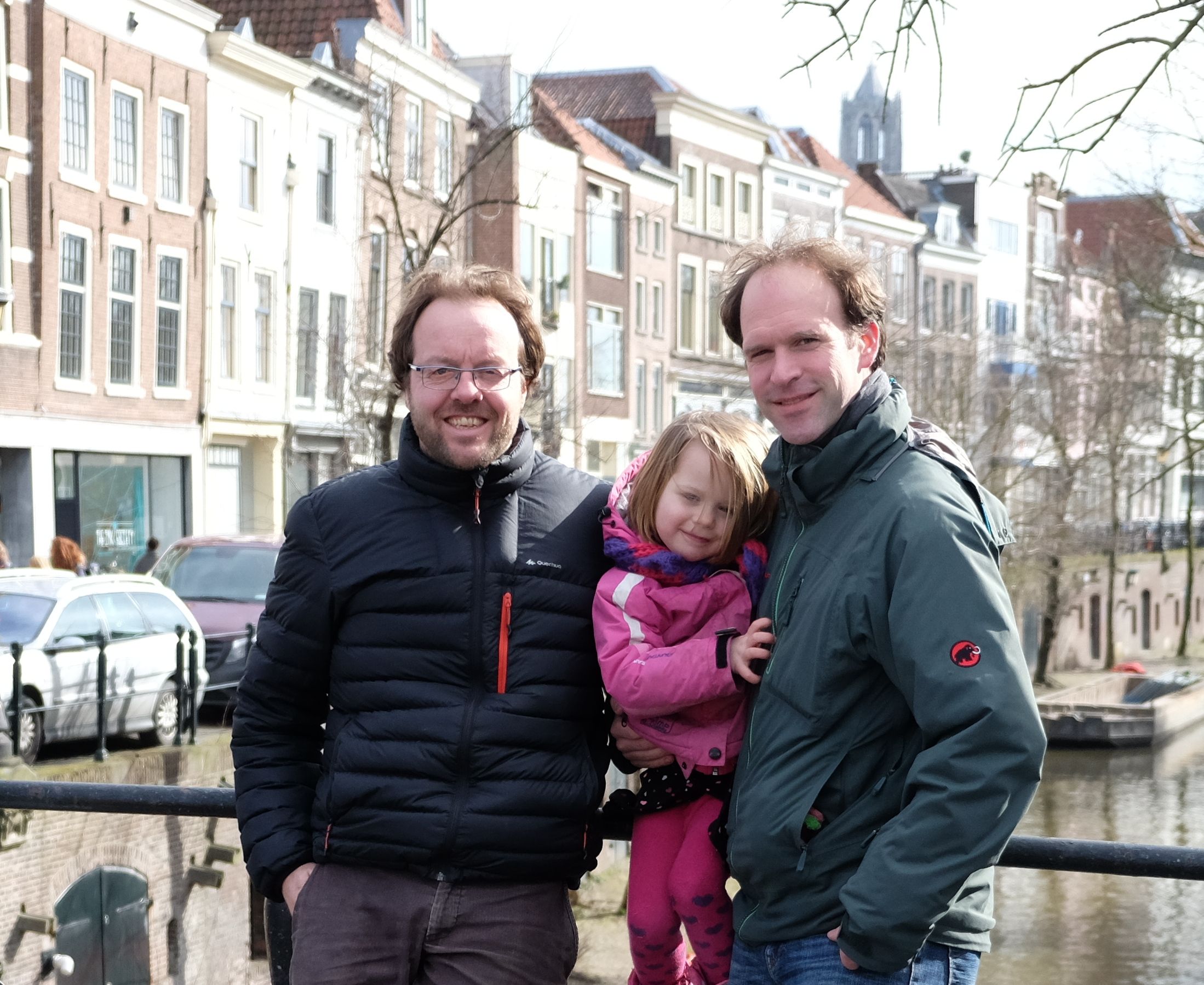 Among the Editor’s picks for March is a paper entitled “The Fractionated Dipole Antenna: A New Antenna for Body Imaging at 7 Tesla”. Co-authors Alexander Raaijmakers and Nico van den Berg have cast their coils aside and adopted antennas, with segmented legs and implanted inductors.

MRMH: How did each of you come to work with MRI?

Nico: I started in applied physics, and about a year into my PhD, while I was studying hyperthermia, I got sick one week, so I grabbed the Haacke book – the big, green bible of MRI – I took it home and fell in love with MRI! With MRI you can image electromagnetic distributions in the human body non-invasively, which we’d been seeking to do to validate our models in hyperthermia, so I managed to convince my supervisor that it would be a good idea for me to continue studying MRI on the side. After that it was more and more MRI up until the end of my PhD. And then the 7 T came along, and now I’m a MRI physicist… Still love the topic!

Alexander: My training was also in applied physics, combining radiotherapy with MRI. After that, it was Nico who approached me, asking if I would like to do something with RF in high field MRI, because body imaging is so challenging and, at that point, the 7 T system at Utrecht had only recently been installed.

MRMH: So what were the main ideas behind this latest work?

Alexander: The antenna work goes back a couple of years when we started to realize that it’s antennas and not coils that you need for body imaging at 7 T. Actually this was a remarkable point at the ISMRM annual meeting in 2010 in Stockholm. Apart from some people that were resisting it quite fiercely, the work was well received. I think people realized that with higher frequencies (shorter wavelengths) you may need something other than coils – you may need antennas. That’s where it started, but with a totally different design: it was a ceramic brick with a dipole atop of it. This current paper is the sequel to that – the logical next step, where we realized we don’t need the ceramic spacer, particularly when we segment the dipole and put inductors in between – we get lower SAR levels and it all fits!

Alexander: The coil is basically what you’d use if you want to boost something close to you. An antenna does the opposite: like a broadcasting radio, you want to emit something at a distance.

With the higher frequency at 7 T, we enter a sort of transition zone where we can no longer rely on coils because coils only boost things nearby – which is fine if your target is nearby, but “nearby” is actually relative to the wavelength of your signal. As your wavelength gets shorter, what used to be nearby now becomes faraway.

Nico: A coil is sometimes also called a near-field antenna. As you go up in field strength, this near-field region shrinks and the deeply-situated body structures move outside it. So you can make a coil to boost your field in the near-field, but, in body imaging, that’s no longer your target region.

MRMH: So what prompted you to get rid of ceramic bricks from your initial design?

Alexander: First of all, they were heavy: it wasn’t practical to have these dielectric bricks, each of them weighing a kilo. (So there would be 4 kg laying on the chest of a person when doing cardiac imaging.)

We also thought we needed the spacer to reduce the wavelength locally so that there would be no near-field inside tissue (so, no enhanced electric fields, no exceptionally high SAR levels). But this turned out not to be true because if you make the antenna long enough, the tissue itself acts to dampen the currents, so the conservative E-fields don’t show up and all you’re left with are the induced electric fields, which do add SAR, but you’ll always have those, even with loop-coils.

Nico: That was one of the main surprises we found. An electric dipole is often seen as an electric field source that’s bringing the problem of tissue heating. The fact that you put these dipoles directly on the body – that interplay with the antenna on the body, that actually dampens your currents and induces much lower E-fields than we anticipated. That for us was the big surprise, and I think it’s a major factor in the success of this new type of antenna.

MRMH: What was the inspiration to segment the dipoles and add inductors in between the segments?

Alexander: Actually, it was when I was walking around at the ISMRM meeting in Melbourne (2012), when I realized maybe I could use a dipole antenna, cut it into pieces, and then add lumped elements between them (capacitors or inductors) and see what happens – maybe then I could manipulate the behavior and still have low SAR levels without a ceramic spacer. That’s what I tried immediately when I got home and it really worked well! Only after that did I realize if I don’t segment my dipole, even without inductors, I still have much lower SAR levels than with the ceramic. So that realization actually came later, although in the paper it was presented first.

MRMH: Would there be an advantage of using your antennas at clinical field strengths, or is this just a high field thing?

Alexander: Actually we’re already doing it! This is work we’ve done together with King’s College in London, and it will be presented at this year’s annual ISMRM meeting in Singapore.

The advantage of the dipole antennas is not so obvious at 3 T – loop-coils have more signal at depth, but they have tremendously more signal at the surface. The dipole antenna has a much shallower profile. It also drops off, but much less steeply – so that’s what gives us a relatively homogeneous field distribution that you actually wouldn’t expect using a local transmit array.

Nico: There’s been a lot of work over the last 10 years on coil designs for transmit arrays at 7 T: people have come up with a lot of original solutions, and they’ve come to have a deeper understanding of RF signal propagation in the body. It’s nice to see the expertise and the technology are now being transferred to 3 T, which is clinically more relevant of course. It’s nice that 7 T, where there’s a lot of activity going on, is acting like a sort of testing ground and a forerunner in some of the technologies.