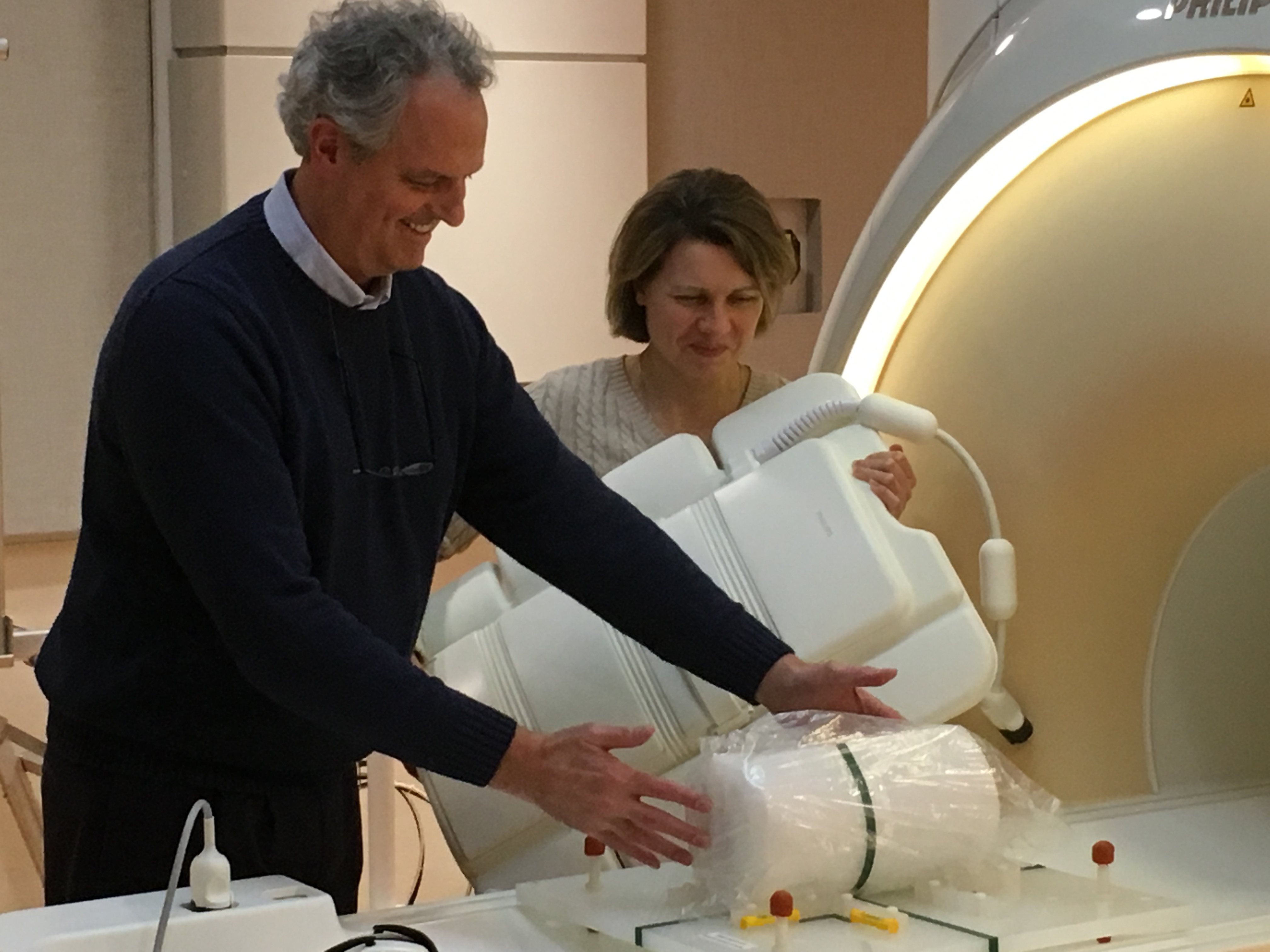 The March Editor’s Pick features Dr. Dariya Malyarenko and Dr. Tom Chenevert, from the University of Michigan. With a background in solid-state NMR and signal processing for biomarker discovery from cancer proteomics data, Dariya started in MRI as an NIH T32 trainee four years ago. Tom began his work in MRI 25 years ago at the University of Michigan. In their paper they perform a multicenter study to thoroughly characterize the sources of technical bias in quantitative diffusion weighted imaging (DWI), and identify gradient non-linearity as a major contributor.

MRMH: Let’s start with the basics. Can you give us a brief overview of DWI? What is an ADC value?

Dariya: Diffusion weighted imaging (DWI) is a commonly used technique that applies additional gradient pulses to encode the mobile spins of water. It is known that the presence of dense cell structures affects the mobility, so we can indirectly monitor the cellularity of the tissue. The apparent diffusion coefficient (ADC) is an isotropic characteristic of the tissue measured by DWI that is very useful for oncology clinical trials.

Tom: ADC is recognized as a very promising biomarker, sort of a self-normalizing measurement that does not depend strongly on the field strength or on the system specifications. The oncology imaging world is looking at ADC measurements as one of the most promising approaches to measure the tissue cellularity. The mathematics to get to a number is quite straightforward; it is inherently a ratio and it is quite objective.

MRMH: What was the main motivation for this work?

Tom: In diffusion measurements there are a lot of different sources of variability, which limit the power of our clinical trials. There is biological variability, such as tumor heterogeneity in oncology, and then there is the variability in the acquisition technique and the way we process data. All of these things contribute to the overall uncertainty of our measurements. What we are trying to do is to reduce the technical variability in our clinical trials and thereby yield a stronger scientific impact.

MRMH: Can you explain the approach you took to understand the bias in ADC measurements?

Tom: It is sort of a long story. We came up with this ice-water phantom through a contract supported by the NCI (National Cancer Institute) to devise a phantom for multicenter trials. Ice water has an exact diffusion coefficient, so we had really good precision, but we detected these spatially dependent results. We were not sure what the relative strength of the various contributors was, like shim, eddy currents, and sequence parameters. So the process that we describe was really to tease out these various influences across different vendors and systems. We saw good agreement at the isocenter of the magnet, but moving off-center we saw disagreement, which prompted us to look at the various contributors. Our collaborations within the NCI Quantitative Imaging Network (QIN) provided fairly broad system landscape to assess these contributors on clinically utilized MRI scanners.

MRMH: How do you maintain the phantom?

Tom: We don’t. You put it in ice water before scanning and let it come to equilibrium. Once the measurement is done, you dump out the water, put it on the shelf, and wait for the next day that you want to use it. There are multiple ice-water phantoms being devised. In fact, we are working with Michael Boss and Katy Keenan at NIST (National Institute for Standards and Technology) and the QIBA (Quantitative Imaging Biomarker Alliance) to devise another ice-water phantom that has multiple diffusion properties.

MRMH: Were you surprised by any of the results?

Daryia: Yes, actually, we were surprised by how similar the patterns for different systems were. We didn’t know a priori how much the gradient non-linearity would contribute, but it was a major source. One interesting point was that the bulk characteristics of the scanner, like bore length and diameter, were very predictive of how much non-linearity we would see.

Tom: In fact, that is important; the gradient non-linearity, which we believe is the main source of this spatial bias, is determined on the assembly line for that scanner. It is predictable and therefore correctable. We should be able to impart a practical solution without having to do calibrations on individual subjects. We have to prove that it is static over time, but we expect this based on first principles.

MRMH: If a researcher at another site wanted to make these corrections, how might they go about doing so?

Dariya: There are a couple of approaches. The best and easiest, which we are trying to promote, is for the manufacturer to implement the correction because they have the system-specific information on their gradient design. We are trying to communicate this problem to the manufacturers and form collaborations to fix it. Meanwhile, researchers can use phantom measurements just one time to empirically characterize their system and form these fixed, three-dimensional corrector maps. In our next work with the QIN collaborators we are going to demonstrate how these system-specific maps are applied retrospectively.

Tom: We are finding the vendors very cooperative, and we have started an academic-industrial partnership between the University of Michigan, UCSF, and Johns Hopkins University, as the academics, and Philips, General Electric, and Siemens, as the industrials. Together, we are teaming up to investigate and try to implement an online correction. So, while we love our ice-phantom, we really do think that the best way to do this is to use prospective knowledge of the system. In the meantime, we recommend people just make their own phantoms. The one we used was just a 12-inch column of water wedged inside of a bottle that you fill up with ice water.

MRMH: Thank you very much; we hope you enjoyed this as much as we did.

Tom: I like the MRM outreach concept. It is good to be able to give a short, digestible summary, and it gives us something to show to our grandkids.