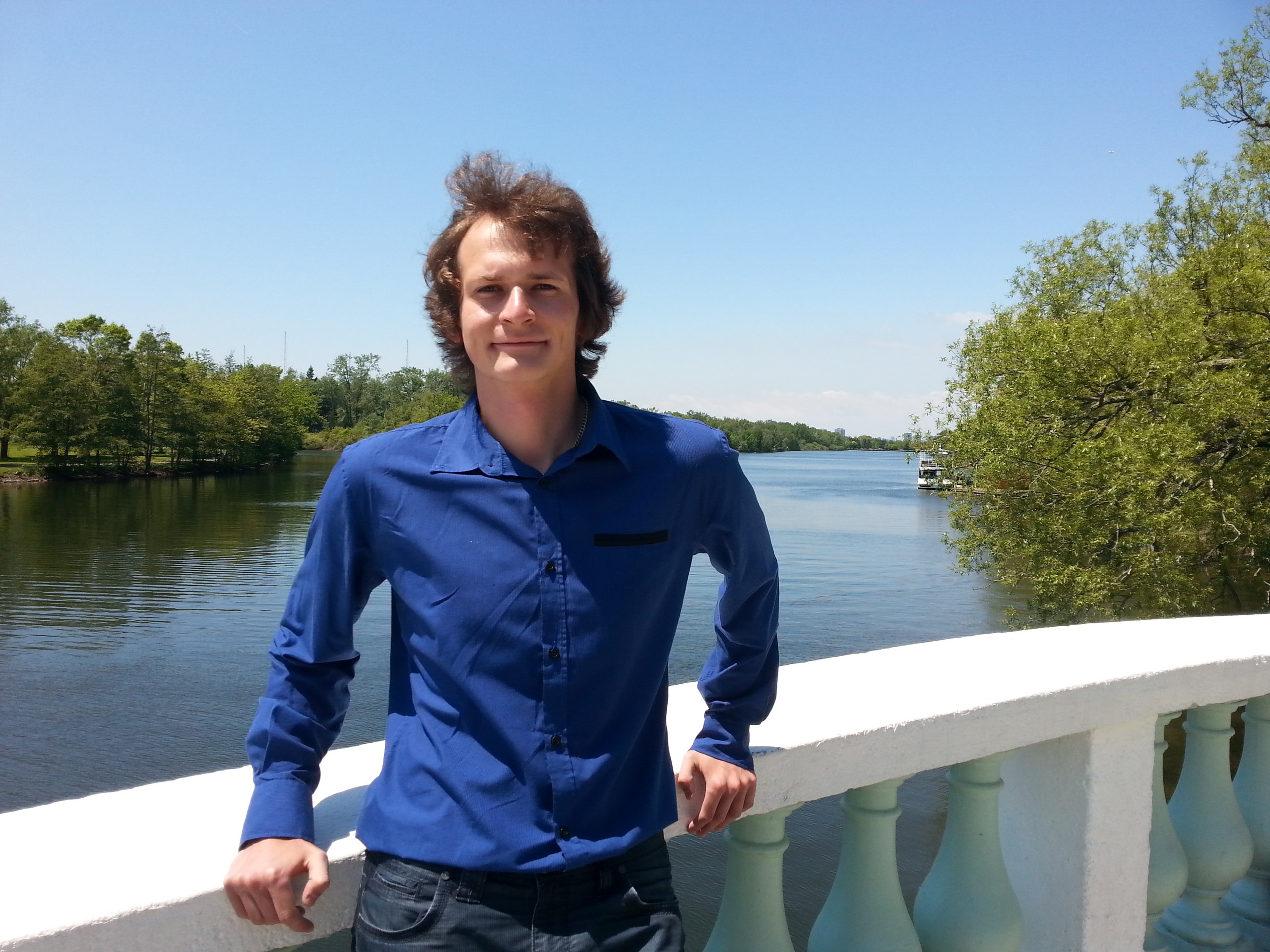 Dmitry Kurzhunov in Toronto for ISMRM in 2015

This September brings us an Editor’s pick from Freiburg, where Dmitry Kurzhunov and his colleagues used Oxygen-17 (17O) to quantify the cerebral metabolic rate of oxygen consumption (CMRO2) on a 3T clinical MRI system. While positron emission tomography (PET) remains the gold standard for measuring CMRO2, Dmitry and senior author Michael Bock give us several reasons why 17O might be the way to go.

Dmitry: I grew up surrounded by physics because my father had been working in academia as a physicist for many years. I also started studying physics, in Russia, at Kazan Federal University, and worked on electron paramagnetic resonance (EPR) for my undergraduate thesis. Then I got a German scholarship and came to Berlin for my Master’s to work on EPR of proteins. During that time, I got to know the big brothers of EPR, namely nuclear magnetic resonance (NMR) and magnetic resonance imaging (MRI). I was fascinated by this new technology so I decided to move to Freiburg and do my PhD in MRI.

Michael: I also studied physics in Braunschweig and Heidelberg, Germany, and in 1990 I joined the Max Planck Institute for nuclear physics. I worked on nuclear physics, electron beams and particle beams, which was extremely interesting but also very hard. It often took ten people to run these experiments, and they could still fail because one vacuum valve was open. After I finished my diploma, in 1995 I started my PhD at the German Cancer Research Center in Heidelberg, which had its own MR center. From that moment, I only worked in MR because I think that it is one of the most interesting technologies out there to diagnose diseases. In 2011, Jürgen Hennig made me an offer I couldn’t refuse, and since then I have worked at the University Medical Center in Freiburg.

MRMH: Can you please give a short summary of your paper?

Dmitry: This paper is a first, but essential step for Oxygen-17 MRI at clinical field strengths. The idea is to perform direct assessment of oxygen metabolism, which is altered in brain tumor regions and neurodegenerative diseases. This abnormality can be quantified with the cerebral metabolic rate of oxygen consumption (CMRO2). Our goal was to investigate the identifiability of CMRO2 in a pharmacokinetic model that fits the H217O signal dynamics after inhalation of isotope-enriched 17O gas. For this, the method of profile likelihood analysis was used, with which we investigated the minimal amount of required prior knowledge about the other model parameters. It was shown that one parameter assumption was sufficient for reliable CMRO2 quantification. Moreover, an advanced CMRO2 quantification model was proposed that accounts for pulsed delivery of 17O gas.

Michael: People have been using 17O MRI in the past at higher field strengths such as 7 T, but it is currently not available in the clinical setting. We want to use 17O as a clinical tracer, which means we have to make this technology available at 3T. 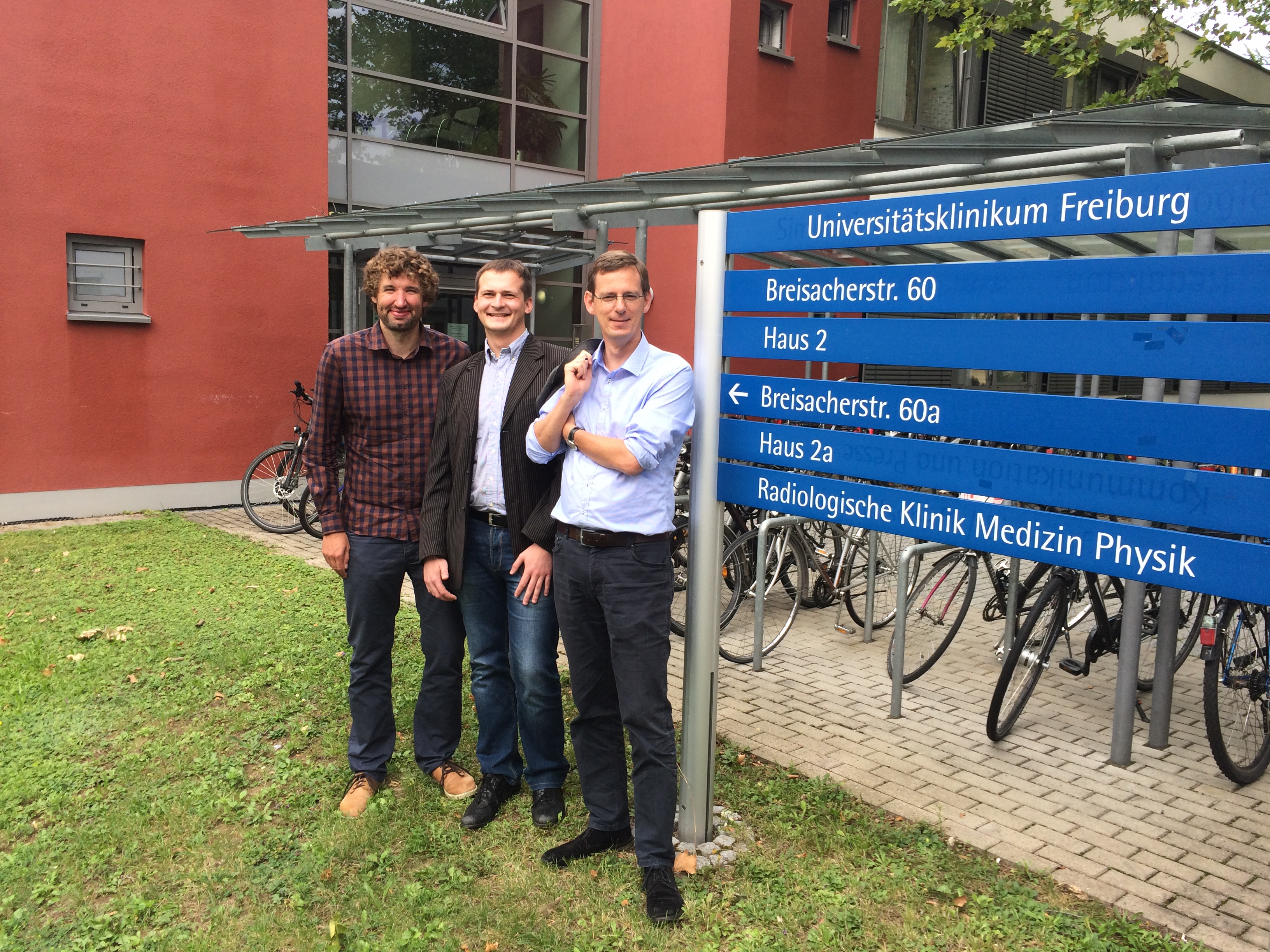 Robert Borowiak, Dmitry Kurzhunov, and Michael Bock (from left to right) in front of the Department of Radiology, Medical Physics at the University Medical Center Freiburg, in Germany.

Dmitry: 17O is the only MR detectable stable oxygen isotope with a non-zero nuclear spin. It can be used as an MR tracer to assess metabolic processes that involve oxygen. The major problem is its very low natural abundance (0.037%), which means that we need to acquire MR data for a longer time and the spatial resolution is rather low.

Michael: Currently, the only established method for direct oxygen quantification is PET with the oxygen isotope 15O. However, it is rarely used due to the short isotope half-life of 2 minutes, whereas the MR isotope 17O is stable, so that we do not have any time restrictions. Another advantage of 17O over other MR contrast agents is that 17O is truly an intracellular tracer. It is transported via the blood, it then enters the cells where it is metabolized to water. Only then it becomes MR observable, because the relaxation times of 17O bound to hemoglobin are very short and we cannot observe it there. Therefore, the signal increase that we see after inhalation of 17O gas must have come through a process of metabolization. Another advantage of 17O is that even if the natural abundance is low, we have unlimited access to it in the atmosphere. We don’t lose any. We inhale it and give it back again through the respiration process, whereas when we exhale a light isotope such as 3He, it goes into the stratosphere and we lose it. 17O only needs to be enriched, but that is very costly.

MRMH: What is the price?

Dmitry: One liter of 70% isotope-enriched gas would cost a couple of thousand dollars. For each experiment we used 2.5-2.7 liters of this gas. We would like to thank NUKEM Isotopes Imaging for their generous support of our 17O MRI project. We also implemented a rebreathing system, so that we can restore and reuse rare and costly 17O gas.

MRMH: How does dynamic 17O MRI compare with other approaches for characterizing the oxygen metabolism (BOLD, PET)?

Michael: 17O is a direct molecular marker, as it determines the MR signal of oxygen in the cells, whereas proton MRI techniques such as BOLD are looking more indirectly at the susceptibility effects caused by oxygen (e.g., in hemoglobin). These could be two complementary measures. However, the gold standard is PET because its sensitivity is much higher. In fact, we are always comparing our healthy volunteer data to PET data from the literature.

Dmitry: We also want to compare 17O MRI with proton MRI as we don’t need additional equipment and the scans are quite fast. It could be interesting to compare the differences between grey and white matter, especially for brain tumor patients. Hopefully, 17O MRI and 1H MRI will provide complementary information. 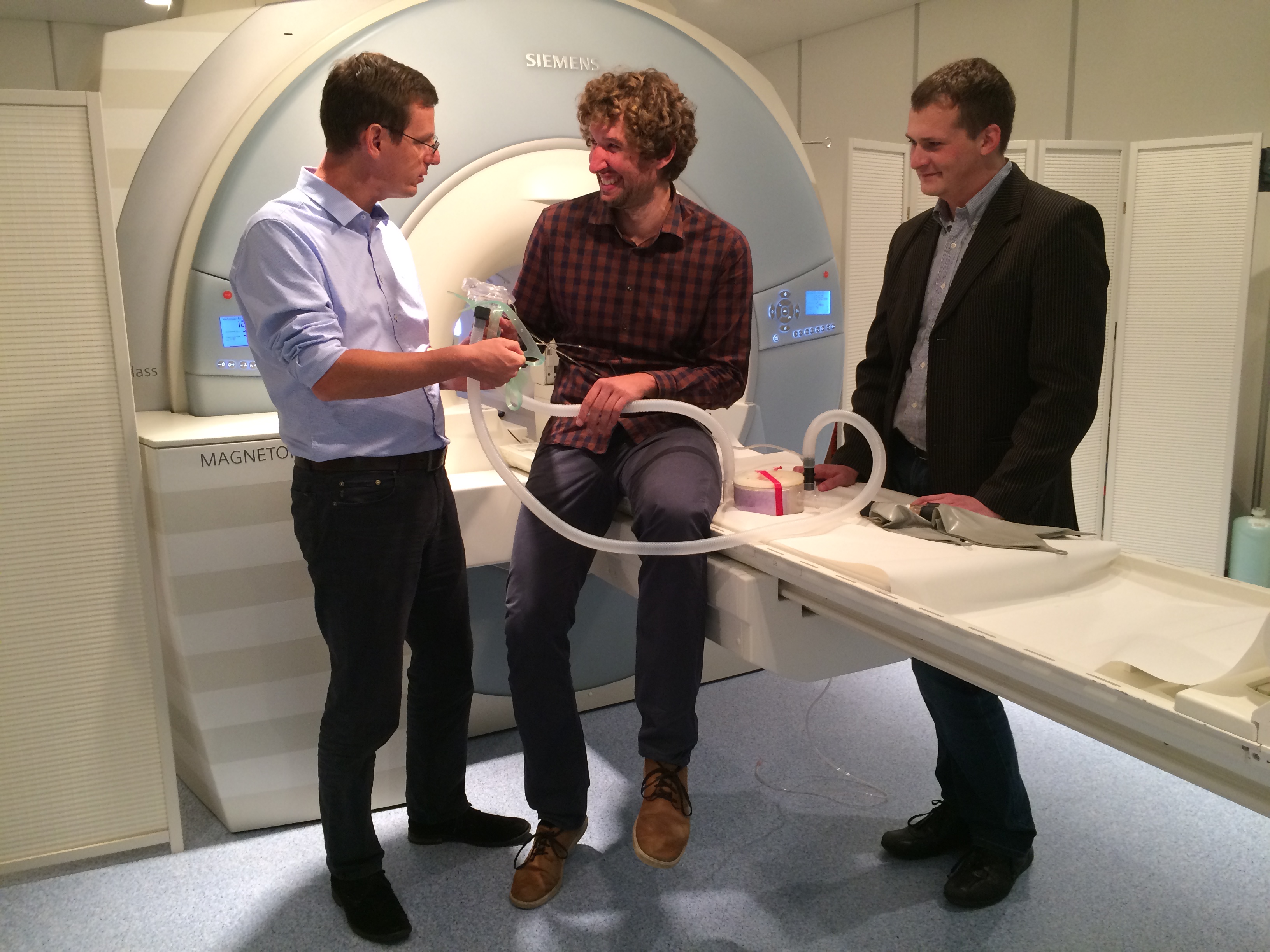 MRMH: What is the biggest challenge for your method and what are your next steps to overcome it?

Dmitry: The biggest challenge is the low SNR due to the low natural abundance of the 17O isotope. To compete with PET, we need to improve everything from hardware and experimental setup to image acquisition and reconstruction. To overcome this challenge, we showed in our recent NeuroImage paper that SNR can be improved using prior information from the coregistered 1H MR data in an iterative reconstruction procedure. We showed a principal feasibility of pixel-wise CMRO2 quantification with 17O MRI in a clinical 3T MRI system.

Michael: A second option would be to acquire data at ultrahigh fields, but this is not done in a clinical environment. If 7T becomes clinically available, this will bring us one step closer to measuring oxygen consumption in the cells of patients affected by brain tumors, stroke or neurodegenerative disease. However, for this technology to flourish at the moment, we need to try to implement it in clinical environments.