Magnetic Resonance Fingerprinting (MRF) was all the rage at the annual ISMRM meeting in Singapore, culminating with the Young Investigator Award (YIA) given to Dan Ma for her work on MRF music. Eric Pierre’s paper that we are highlighting in June provides the reconstruction framework that led to the YIA. The Highlights team interviewed Eric and senior author Mark Griswold.

MRMH: What is MR fingerprinting?

Mark: Back to the defense questions, I love it!

Eric: In short, MR fingerprinting or MRF is a very efficient parameter mapping technique. Each tissue type generates a signal evolution that is unique to it. This signal evolution acts like a temporal fingerprint. By comparing that fingerprint to a pre-computed database, MRF can then identify all the parameters of interest at once. That’s what makes MRF so powerful: it is able to produce, for example, T1, T2, and off-resonance maps – all registered perfectly to each other – in a very efficient timeframe.

MRMH: What does a typical MRF pulse sequence and reconstruction look like?

Eric: That’s a bit of a tricky question, because there are many ways to produce an MRF sequence. Conventionally, the sequence calls for pseudorandomly varying flip angles and TRs. The object is encoded at each TR, usually with a highly efficient and highly undersampled trajectory like a spiral or an EPI sequence. The key aspect is that you need the k-space coverage to change with each TR; this way, at a pixel level, the aliasing artifacts act like random noise with respect to time. This preserves the overall shape of the temporal fingerprint. What never ceases to amaze is that, while each reconstructed image usually looks like garbage, MRF can cut through all this noise and retrieve the right tissue fingerprint. It’s just that powerful!

Mark: From a big picture perspective, we can use almost any sequence that you can dream of. It only has to have two requirements. First, we have to be able to separate different tissue types from one another based on their signal evolutions, meaning that they have to look different in time. Second, in order to make an image, we have to separate different spatial locations. So, any sequence that can meet those criteria – which is an infinite number of combinations – is one that is a potential MRF sequence.

MRMH: Can you give us a brief summary of your paper and its significance?

Eric: What the paper presents is a very broad, flexible scheme to reconstruct image series acquired with an MRF sequence with improved accuracy of the parameter maps. While conventional reconstruction techniques end up with a guess that is usually right, there may be errors, especially when we try to reduce the length of the acquisition. The reconstruction scheme uses a Projections Onto Convex Sets (POCS) method where we iteratively bounce between denoised image series, and image series that match the data. So, it becomes denoising, reincorporating the data, denoising, until you converge to a solution. The trick we added in our paper is a Gaussian filter that controls the effective resolution of the image series and reduces error as the method converges to a solution. This is what we show in the paper. We are still able to converge to acceptable maps, even with a lot fewer time points that MRF conventionally calls for.

Mark: The errors that come from the noise are coming from spatial undersampling. The conceptual way you can think about this paper, then, is that we reconstruct the low frequency components of our image first since we have slightly higher sampling in the center. We then use that information to reduce the aliased energy at the other pixels. This is what makes the estimate better and converge to the right result.

A recent group photo of the lab on campus at Case Western Reserve University.

MRMH: What are the limitations of MRF?

Mark: First, simply implementing a sequence that is fingerprinting capable, where the TR varies continuously, the flip angle, getting that coded up and stable is difficult. The second challenge is actually having a gold standard to compare to. The ISMRM NIST phantom is incredibly important to have because we have an infinite number of sequences to choose from – and each one of them can have different errors – and having an unbiased phantom that is validated by an institution is wildly important. Beyond that, while the dictionaries that we use for the database can be large, they are completely compressible. We have done a lot of work in that area. It can seem like a daunting reconstruction problem, but in reality, I think the code we put in the original Nature paper was way less than 50 lines of code. It’s really not difficult to program up.

MRMH: What’s next for MRF?

Eric: With respect to this paper, we are looking for ways to make the reconstruction process more efficient. As it is, the method can take hours, sometimes even days, to produce maps with this process, particularly for MRF sequences with high resolution and lengthy time series. That’s the next obvious low hanging fruit for this technique. As far as fingerprinting as a whole, well, there are tons of different optimization problems to tackle, and it’s a bit early to say how far it will take us. It’s a bit like seeing the first flight of the Wright brothers and asking “so where are you going with this?” In particular a hot topic for MRF right now is that while we know what a good dictionary looks like, we don’t know how to automatically create a pulse sequence that would generate such a dictionary. Finding a method that can reverse engineer the dictionary creation process will be a big problem to solve.

Mark: People are starting to look at making sequences that are sensitive to different things. CEST, spectroscopy, diffusion, partial volume estimations – just diversifying what we can see. The next approach that I saw a lot of at ISMRM are people trying to optimize the sequence, which is difficult because it is a wildly non-linear and non-intuitive problem. Clinically, there is a ton of work happening in the lab. We’re using this in the heart, brain, liver, prostate, breast.

MRMH: And on top of it, MRF can also sound beautiful…

Eric: This ability to move away from conventional k-space trajectories gives you a degree of freedom. If you want a k-space that can generate music like Dan Ma showed, you can. It’s extremely powerful.

Mark: As you can imagine, trajectories like the music-based trajectories are not as efficient as spirals. But, using the method that Eric published, Dan Ma showed that its efficiency per unit time is actually the same as the spiral-based one! So, just by applying this reconstruction method, we went from super efficient spirals – which sound horrible – to beautiful sounding music, and the impact on the results were basically nonexistent. That’s kinda cool. 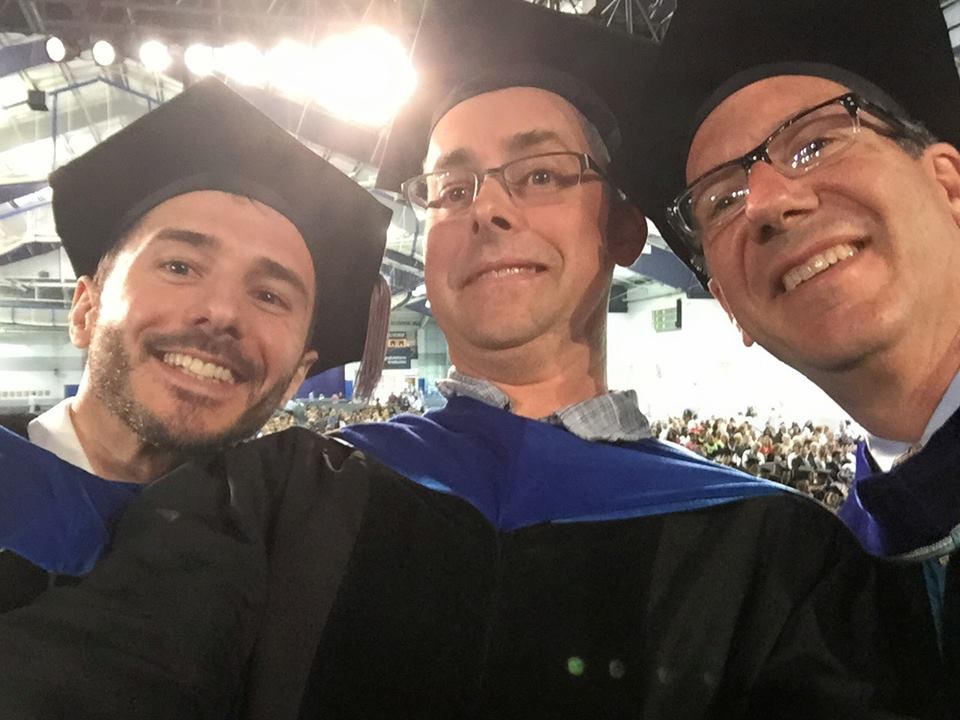 “On stage” selfie at Eric’s graduation with Mark and Jeffrey Duerk.

MRMH: Eric, can you tell us about your background?

Eric: I was very lucky to have Mark accept me as his PhD student. After graduating in 2014, I moved to Australia to start a postdoc at the Florey Institute of Neuroscience. That’s in “cold” Melbourne, so no surfing for me. I moved a little bit away from the reconstruction world and more into the realm of diffusion and acquisition. Adding more arrows to my quiver.

MRMH: Mark, you just chaired the annual ISMRM meeting. Can you tell us what the experience was like for you?

Mark: It’s an amazing honor to be able to put together this meeting. We had a closing party with the staff on Friday night of the meeting, and I talked about the fact that this is my home society. I don’t need to go anywhere else. I’ve been coming to the meeting since 1995. To be able to organize it, to provide that home for the next generation of people, it was just fantastic. We had so much fun in Singapore, I didn’t feel like I did that much. My job was to manage the team that does all the stuff. The annual meeting program committee members are just some of the best minds in our field. The amount of work that goes into making this meeting happen is just immense and they did just a phenomenal job. If you remember, we changed the abstract format this year, which meant changing the review process, and generally how we assembled the entire meeting. The fact that they all stuck with this is just amazing.