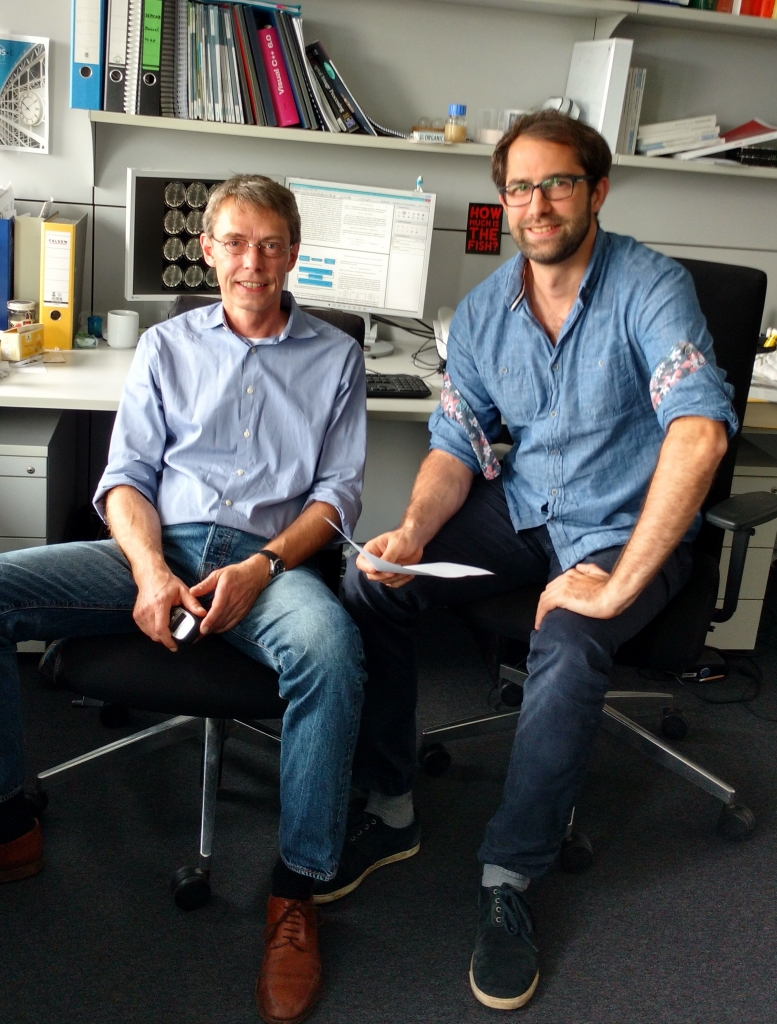 On the 24th of June, we sat down with Klaus Scheffler and Philipp Ehses to ask them a few questions about their recent MRM paper, “High-Resolution Mapping of Neuronal Activation with Balanced SSFP at 9.4 Tesla”. They are based out of the Max Planck Institute for Biological Cybernetics in Tübingen (where Klaus directs the High Field Magnetic Resonance Center), which houses one of the few 9.4 T human MRI systems in the world. We were fortunate enough to have a really fun discussion about their work on SSFP fMRI, the importance of eating breakfast (at ISMRM), and whether or not EPI has passed its “best-before” date…

MRMH: Can you tell us a bit about how you got into MR research?

Phillip: For me it was a bit random. I studied in Würzburg, which was a big MRI site (at least at the time), and I did my diploma thesis in 2005. There I did some NMR spectroscopy, but I had befriended a bunch of MRI guys, so then I moved to imaging and very soon was interested in sequences and sequence design. I started working on designing new sequences, and it became a big interest of mine. After that I moved to Tübingen and I was looking for new projects, and at some point Klaus suggested to try bSSFP again, and that’s how we ended up here.

Klaus: I very randomly came to MR – I did theoretical physics at Freiburg working on something completely different. Then I moved to another university and I wanted to get involved with Chemistry, and my supervisor, he just said, “No, you are a physicist, you have to do MR”. And that’s how I came into it. We had one of the first MR systems in Basel, but I never chose it actually, it was really by chance.

MRMH: How did you come up with the original idea of using SSFP for fMRI? 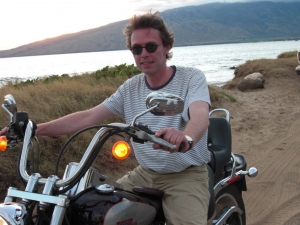 Klaus Scheffler making the most of ISMRM in Hawaii.

Klaus: As far as I remember, this idea came up at the ISMRM in Colorado in 2000. I was sitting for breakfast together with Mark Haacke and Michael Deimling from Siemens, and we discussed the features of the [bSSFP] stop band. We talked about the very high sensitivity to phase in the stop band, and the idea was born to try BOLD imaging. I was at Freiburg with Jürgen Hennig at the time, and I immediately started with these experiments in the stop band at 1.5 T (I think). We did 5 experiments: 3 went fine and 2 didn’t work, so that’s how it came about.

MRMH: What are some of the unique challenges you face working at 9.4 T?

Philipp: In general things are just magnified at 9.4 T, so we kind of have the same challenges as at 7 T. Things like transmit field inhomogeneities are worse, so certainly these are big problems. Apart from that, a unique challenge for us is that until recently there was no RF hardware available, so our RF specialists had to build and design RF coils, both receive and transmit, over multiple iterations, basically until we had our system running so we could do these experiments.

MRMH: Do you expect bSSFP imaging to see increased use at ultra-high field compared to conventional gradient/spin-echo EPI methods, and what do you think the primary barriers are to its adoption?

Klaus: I think in the next few years nobody will use EPI anymore (laughs). No, but seriously we are really currently working on this. The speed of bSSFP is about 3-4x slower than EPI, and so it’s not as efficient, and that’s of course a very important issue if you really want to get this work into functional or clinical studies. What we are trying to do is acquire not just 1 echo, but 3 or 5 echoes and it looks really good, and we are on our way to preparing our next paper. The latest sequences we have now have about 80% of the EPI performance, in terms of speed. Besides the speed, the signal change is less than with gradient echo EPI, which is of course also an issue with spin-echo EPI as well. I don’t know, maybe it’s three and a half years before EPI is useless… (more laughs) 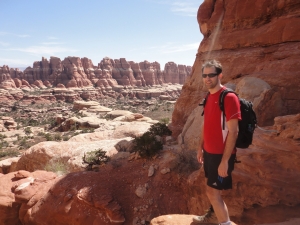 Philipp: First of all, most people would probably think banding artifacts are the biggest barrier to adoption, but I think that’s actually not really the case because the banding artifacts we see right now (at least with the relatively short TRs that we are using) are not that bad, and are usually in areas where you would have very strong distortions or signal dropouts in EPI anyway. So in this case, it’s relatively similar to EPI in that some regions are just not measureable. There is also a lack of bSSFP sequences that are really optimized for functional imaging – right now bSSFP is mostly used in cardiac imaging. It also has to be user friendly. Right now we take great care in getting the field homogeneity just right, because of course this is really important for bSSFP, even more so than for EPI.

MRMH: Before we wrap up, is there anything you’d like to add?

Klaus: Thank you very much for the interview.