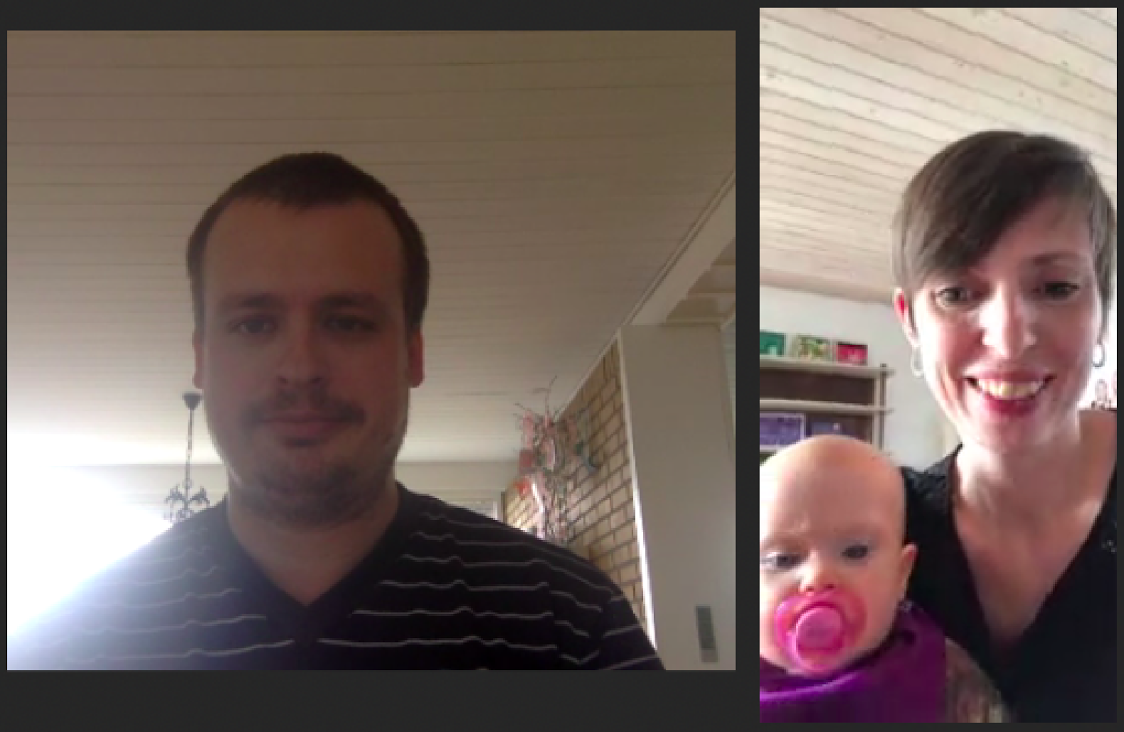 Christoffer, Lotte and Ellie, captured in midthought during our Skype interview

This month we sat down with Dr. Lotte Bertelsen, Dr. Christoffer Laustsen, and our youngest (and cutest!) MRM contributor, Lotte’s 8-month-old daughter Ellie. From their homes in Denmark, Christoffer and Lotte discussed the April Editor’s Pick: Diabetes induced renal urea transport alterations assessed with 3D hyperpolarized 13C, 15N-Urea. In this work, Lotte and Christoffer use MRI to assess renal function in diabetic and normal rats by measuring the hyperpolarized 13C-Urea gradient across the kidney.

Jessica: Lotte, how old is Ellie?

Lotte: Ellie is 8 months old, and I have two older girls at the ages of 8 and 10. It’s a full house! Hopefully they’ll stay out in the living room for the rest of the interview.

Jessica: Can you tell us a bit about your backgrounds?

Lotte: I’m a post-doc. I finished my Ph.D. in 2014 at The MR Research Centre at Aarhus University, where I’ve been for nearly 10 years now. My main interest has always been cells, so I started out in immunology and was able to work with tracing cells where I’m using MR as a modality.

Christoffer: I had a pretty typical way into science; I did a little solid state and biomolecular NMR, then moved into dynamic nuclear polarization and MRI. Now I am associate professor at the same center, and I spend a lot of time with my family when I’m not working.

Jessica: What was your motivation for this work?

Lotte: This was a project where Christoffer and I could combine our forces on hyperpolarization in an animal model that we knew quite well.

Christoffer: We have done a lot of work in relation to diabetic kidney disease in this STZ Type I diabetic rat model. In previous work, at 2 weeks of disease, we saw no change in the hyperpolarized urea signal between the diabetic and normal kidney. However, when using hyperpolarized pyrivate, we saw a dramatic increase in the lactate pool size indicating early renal changes. This led us to try a longer duration timeframe, with measurement using hyperpolarized urea 4 weeks after induction of diabetes, using the high resolution that we achieved previously.

Jessica: The physiology is interesting. How do hyperpolarized urea images indicate renal function?

Christoffer: The kidney uses a lot of oxygen to pump fluid to create a gradient that drives the cleaning of the blood. Urea is one osmolyte that follows this gradient. The steepness of this gradient is what we are interested in, because it is believed to indicate the degree of urea reabsorption. A diabetic kidney goes into overdrive and uses too much oxygen, which creates a pseudo-hypoxic situation, even though you have sufficient oxygen. Eventually the kidney does not have enough energy to sustain that gradient.

Jessica: You derive the gradient from the intensity of the image, right? Is it unitless?

Christoffer: Right, one of the drawbacks of hyperpolarization is that the signal doesn’t necessarily reflect a quantitative number. It is dependent upon the polarization level, so we normalize to the signal in the cortex. To ensure comparison across studies, the amount and the timing of the injected tracer needs to be controlled.

Jessica: What advantage does the use of hyperpolarized urea have compared to the conventional measures?

Lotte: Urea is a natural product found in the human body, and the hyperpolarization produces a stronger MR signal. Compared to conventional MR, the hyperpolarized biomarker is especially advantageous for patients or animals with renal insufficiencies because you don’t need a contrast agent that may cause severe side effects when accumulated in the diseased kidney.

Jessica: You used a diabetic rat model, but could you use hyperpolarized 13C in other situations where you might have kidney failure?

Christoffer: Yeah! We believe that it is a general biomarker for kidney function. We have demonstrated that in a model of acute kidney injury where you completely abolish the kidney function of one kidney. We have also translated this to a porcine model because the pig’s kidney has closer renal physiology to a human. 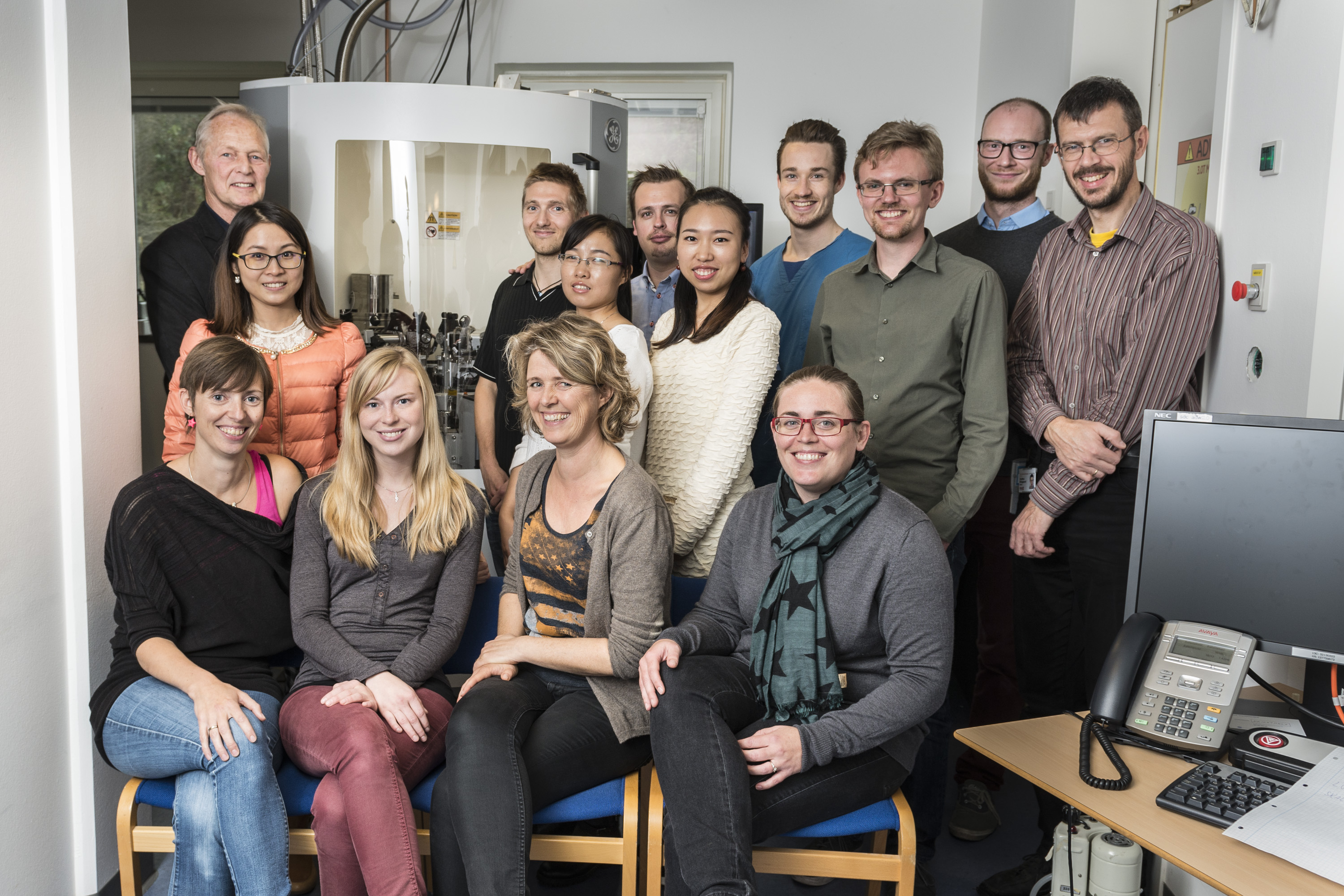 Jessica: Where do you want to go next?

Lotte: Basically exactly what we are doing …going into larger animals and eventually to patients. We intend to move to pancreas cancer patients by the end of this year.

Christoffer: But we will start with hyperpolarized pyruvate instead of urea.

Jessica: I’m missing something; what is the difference between urea and pyruvate?

Lotte: Urea is an end product in the time frame what we are looking at. Pyruvate, on the other hand, is a molecule in several metabolic pathways, that will be metabolized to either lactate or CO2 and bicarbonate, depending on the oxygen availability in the given tissue.

Christoffer: It’s a completely different thing. With urea you see perfusion and the hemodynamic response, but pyruvate gives you uptake and what it is being converted to.

Jessica: What will it take to translate to humans?

Lotte: It has been challenging to get the right approvals and to ensure that the pyruvate fulfills the requirements of a sterile produced agent.

Christoffer: We also need further comparisons with other biomarkers, especially those that are more accessible. For now it looks very promising; I certainly hope that other scientists will work more on this. We are eagerly anticipating whether they will show some of the first human data with hyperpolarized urea at UCSF. I’m hoping to see some very exciting stuff from them!

Christoffer: There is some debate, but the general thought is that 14N is quadrupolar, which relaxes very fast, at low fields at least. At high fields it might not matter too much, but we don’t really know. We don’t think that we get any benefit from the 15N at 9.4 Tesla, but during the transfer from the hyperpolarizer to the magnet, 14N would decay very rapidly.

Jessica: Thanks you guys! I have to say that I love this Highlights feature. It was spontaneous, and we have Ellie to thank for that. It’s also different, and I really learned a lot.