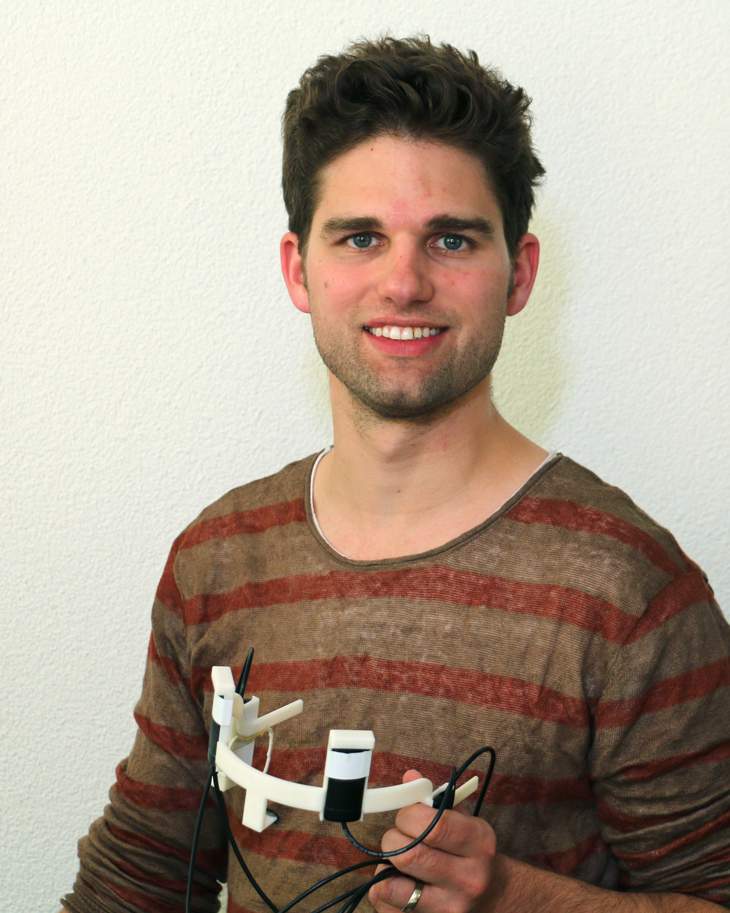 Among the editor’s picks for September is a paper from Klaas Pruessmann’s group at ETH Zürich introducing a new method for simultaneous motion correction and field monitoring. We spoke with Klaas and leading author Max Haeberlin about their unique technique to “make the gradients sing”.

MRMH: Max, your recent MRM paper was selected as an Editor’s Pick for the month of September. Could you tell us about the main aims of this project?

Max: The context is really clear cut: Rigid-body motion correction for brain MRI. We’re taking up on previous work that used NMR markers but which, in our mind, used a sub-optimal timing strategy – one alternating between image encoding and probe tracking. In our approach, we’re trying to remove this fundamental disadvantage by separating the probe tracking and image encoding in the frequency as opposed to the time domain.

MRMH: Why 19F probes in particular?

Max: [Laughs] As opposed to proton? Certainly to decouple the imaging and field probe signals. And why fluorine? It’s probably the most sensitive liquid state nucleus that you could use, but the most important thing is it’s different from the nucleus used for imaging.

MRMH: So you would need a dual RF system to be able to implement your method at the moment?

Max: At the moment, no. At time of publication, yes, that’s the way we implemented it. In our lab now we’re already working with external spectrometers that do the signal processing for the motion correction. So that’s not a fundamental, but more of an engineering issue.

Klaas: In the paper, only a clinical spectrometer was used. We think it’s fairly simple to integrate because the RF infrastructure is the same and the requirements of the spectrometer are the same – just another few channels, but channels aren’t in short supply nowadays.

MRMH: Any other challenges to deal with?

Klaas: Well the elephant in the room is rigid-body relationship of the sensors and the skull. The residual motion of the marker relative to the brain, due to skin mobility, remains an open issue. If we want to handle 1 cm of motion, that is fine, but submillimeter motion is still difficult to correct.

MRMH: Is there anything that surprised you during your study?

Max: We didn’t start off with individual frequency tones to localize the probes. Initially we thought we’d do it somewhat differently, relying on more readily available wideband signals and no single frequency tones, so that was certainly an insight.

Klaas: I must admit I was surprised how nicely all the specs ended up in a good range. For this to work, you need to be sensitive enough with a given nucleus and probes of a given size. You have some degree of sensitivity, which translates into some spatial determination error, and this ended up being some tens of microns, which was exactly what we needed. In principle it could’ve been two orders of magnitude off, so I was pleasantly surprised. It was almost as though someone, a higher entity, had made sure that this would succeed!

MRMH: So the universe conspired to make it work! How did you end up with this insight of single tones?

Klaas: It was quite a few moons ago! Every summer we hold a group retreat, which is a full week of the whole group being in a remote place – working, eating, cooking, drinking, and playing soccer. It was a retreat in Italy quite a few years ago. We were asking ourselves, if we have these probes, how might we identify position based on gradient action? And David Brunner, one of the co-authors, he said “Make them sing! Make the gradients sing!” As it is with David sometimes, all his ideas are good, but you don’t always immediately know what he’s saying. [Laughs] So he explained it, and it was really his spontaneous intuition, which came from his background in sideband modulation – where you have a resonance line, and a Bo field, and by adding a subfield, at a frequency of 1 MHz perhaps, the resonance line will split up into the original line and two ghosts 1 MHz away. One could argue that’s what we’re doing here: We modulate the field that the probes see, and this generates a protected sideband from which we can read the position. And in a moment this all happened in David’s mind… under the influence of Italian wine.

MRMH: Max, you recently finished your PhD, can you tell us about your career path, past and future?

Max: My background is in electrical engineering, I got involved in MRI during my Master’s and then started with Klaas as a PhD student. I graduated a year ago and I decided not to pursue an academic career, but it’s not clear at the moment where my life will take me…

MRMH: Klaas, what about your vision for the future? Trends in MR, advances that you foresee and you would be excited to work on?

Klaas: I see a lot of mileage out of more sensing and more deployment of IT fueled by sensor inputs. Is this a good scan, should it be interrupted? Can we steer against deviations? You don’t want to be concerned with head movement, slight heating, or a train driving by. I think the answer is a sensor input to an IT system that makes smart decisions, such as readjusting the geometry of the sequence. If we can leverage IT more, we can definitely boost MR.