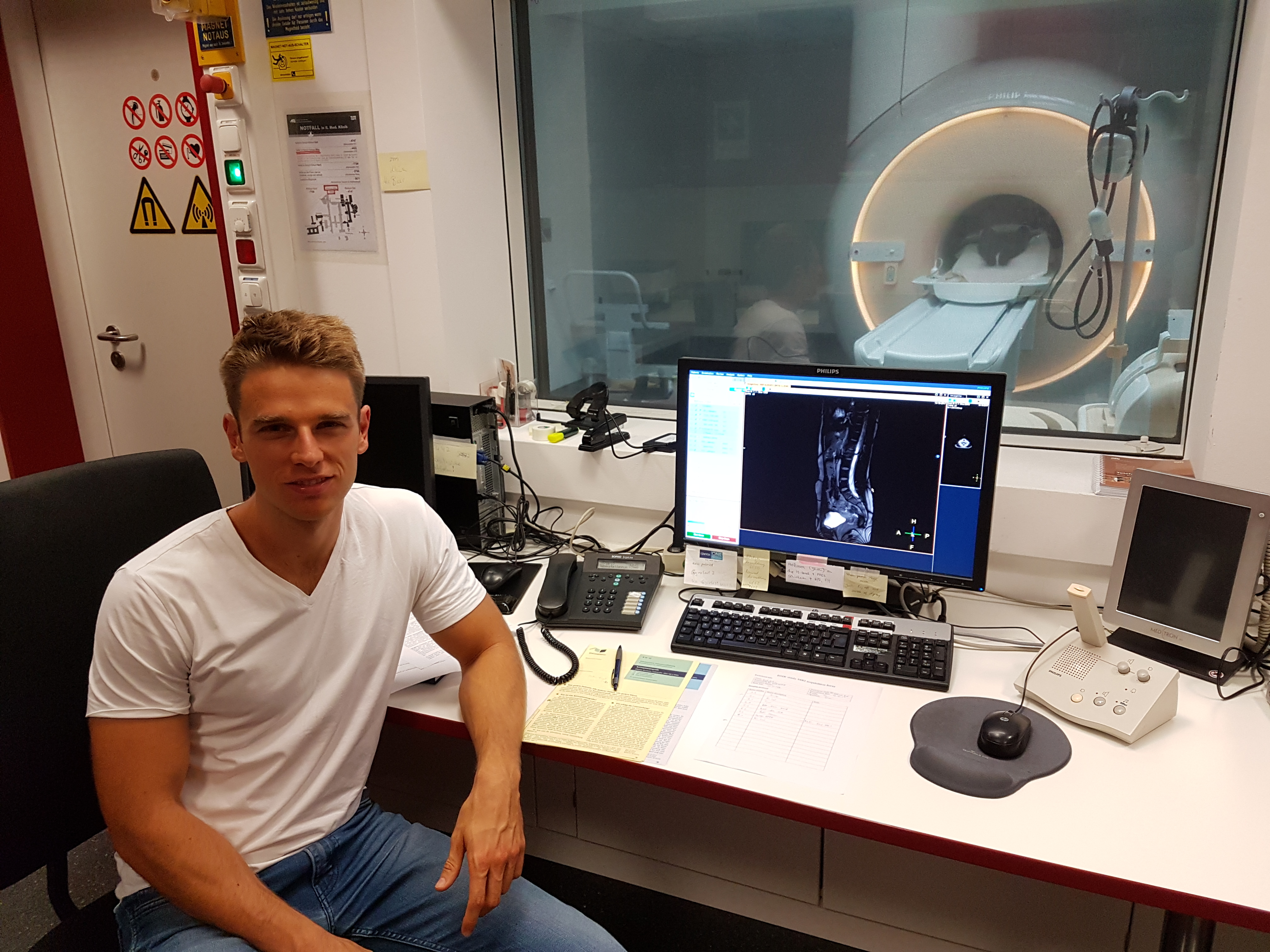 This month we talked to Michael Dieckmeyer and Dimitrios (Dimitris) Karampinos about their work to measure apparent diffusion coefficient (ADC) values in bone marrow. Michael has a very diverse education that includes a master’s degree in mathematics, and he is currently completing his final year of medical school. His mentor Dimitris leads a multidisciplinary research team in Munich that focuses on the development of quantitative MRI, targeting musculoskeletal diseases and metabolic diseases like obesity and diabetes. In this paper, they use modeling to overcome some of the challenges of ADC quantification in the presence of fat. By including the proton density fat fraction (PDFF) and the T2 of water, they can reduce the bias in the ADC measurements that is introduced by residual fat.

Jessica: How did you get involved in this project?

Michael: During my third year of med school I became interested in a doctoral thesis, so I got in contact with Dimitris. The project sounded great to me because it had this quantitative approach that most of the projects in medical school lack. It was a big plus that I could connect this quantitative aspect with patients/in vivo experiments, so I can use both my mathematical and medical skills.

Jessica: Cool. I’m always impressed by the people who can wear both hats.

Dimitris: We have an entire program focused on quantitative imaging biomarkers using MR techniques in a variety of tissues. The starting point for Michael’s work comes from our interest in developing biomarkers for assessing bone health and, more generally, in the quantitative MRI of tissues in the presence of fat. In the big picture, we are interested in looking both at the properties of the adipocytes themselves and also the properties of water in tissues that contain fat.

Jessica: Why do we care about measuring diffusion in bone marrow?

Michael: Diffusion reflects the tissue microstructure and can differentiate between malignant and non-malignant vertebralfractures. In general, diffusion is an interesting biomarker that is better characterized in the brain, so I think it could be beneficial to extend this approach to other body regions.

Dimitris: From a basic biology and physiology perspective, the bone marrow adipocytes are quite special. Their role is not well understood, but it has implications in bone health and metabolic diseases. The Society of Bone Marrow Adiposity was formed just this year to figure out how to study bone marrow structure and function. They are always in need of new non-invasive imaging techniques. In MR this is a niche area where there isn’t a lot of activity, but there is a great interest outside. 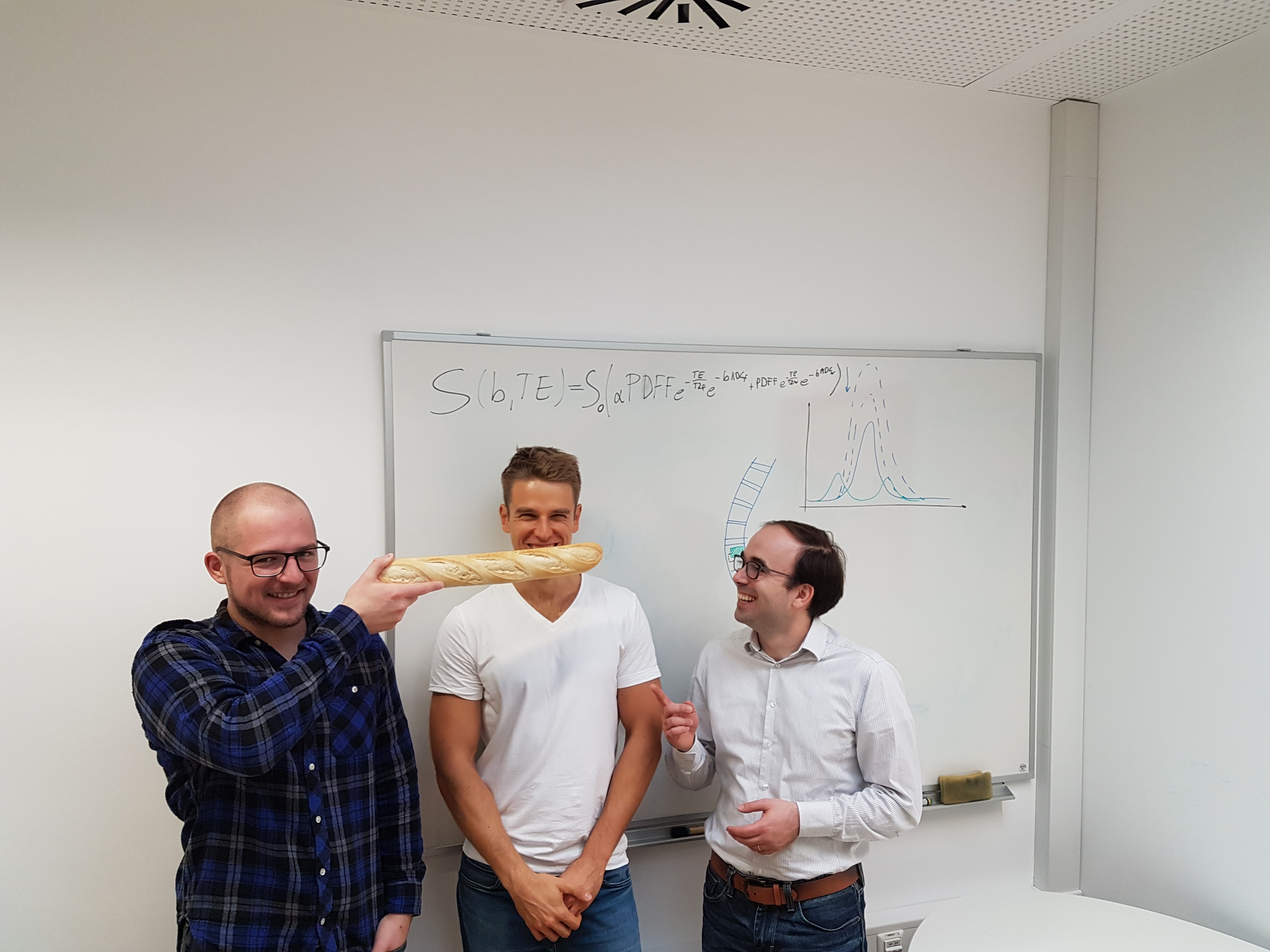 Jessica: In your paper you discuss fractures. What’s the difference between a malignant and a non-malignant fracture?

Michael: In a malignant fracture the bone marrow gets infiltrated by cancer cells that destroy the structure of the bone causing the bone to fracture without any strong trauma. In a normal fracture there’s usually a traumatic event that causes a healthy bone to crack.

Dimitris: In the bigger picture we are interested in developing quantitative MRI techniques for a range of tissues in the body that contain fat, which makes quantitation more challenging. So this is a general toolset that is important and can be translated to other tissues.

Jessica: I think some of the brain folks might be wondering, “What’s the big problem with fat?” Why can’t you just do better fat suppression?

Michael: Fat is a large molecule that has a lot more protons and chemical bonds. Therefore it has 8 or 9 peaks that have different resonance frequencies, and 2 or 3 of those are very close to the water peak, so fat suppression techniques that are spectrally selective don’t suppress these peaks without affecting the water peak. When these two components get mixed up there is a huge bias in the ADC because the water molecules are diffusing at a much higher rate than the fat molecules.

Jessica: What acquisitions are required to account for the presence of fat?

Jessica: How do you know when it’s safe to make assumptions in order to simplify your model?

Michael: That’s a question that we thought a lot about through this process. It helps to have a tool that can validate your model results and give you confidence that you are on the right path, especially in those moments when you’re thinking, “This doesn’t work!”

Jessica: What did you use to validate your model?

Michael: We used a diffusion weighed STEAM sequence. The MRS has a spectral resolution high enough to separate the water peak from the neighboring fat peaks, which represent the residual fat in the imaging. You can get a water ADC that is not biased by the overlapping fat peaks.

Dimitris: In quantitative MR we often build phantoms; here we are dealing with such a complex issue because of the diffusion properties and the variation of fatty acid composition that we use another MR technique to validate. Using another MR technique is not always desirable but it is in our case quite powerful. For the broader dissemination of any MR technique, using a technology outside of MR as validation would be highly desirable. 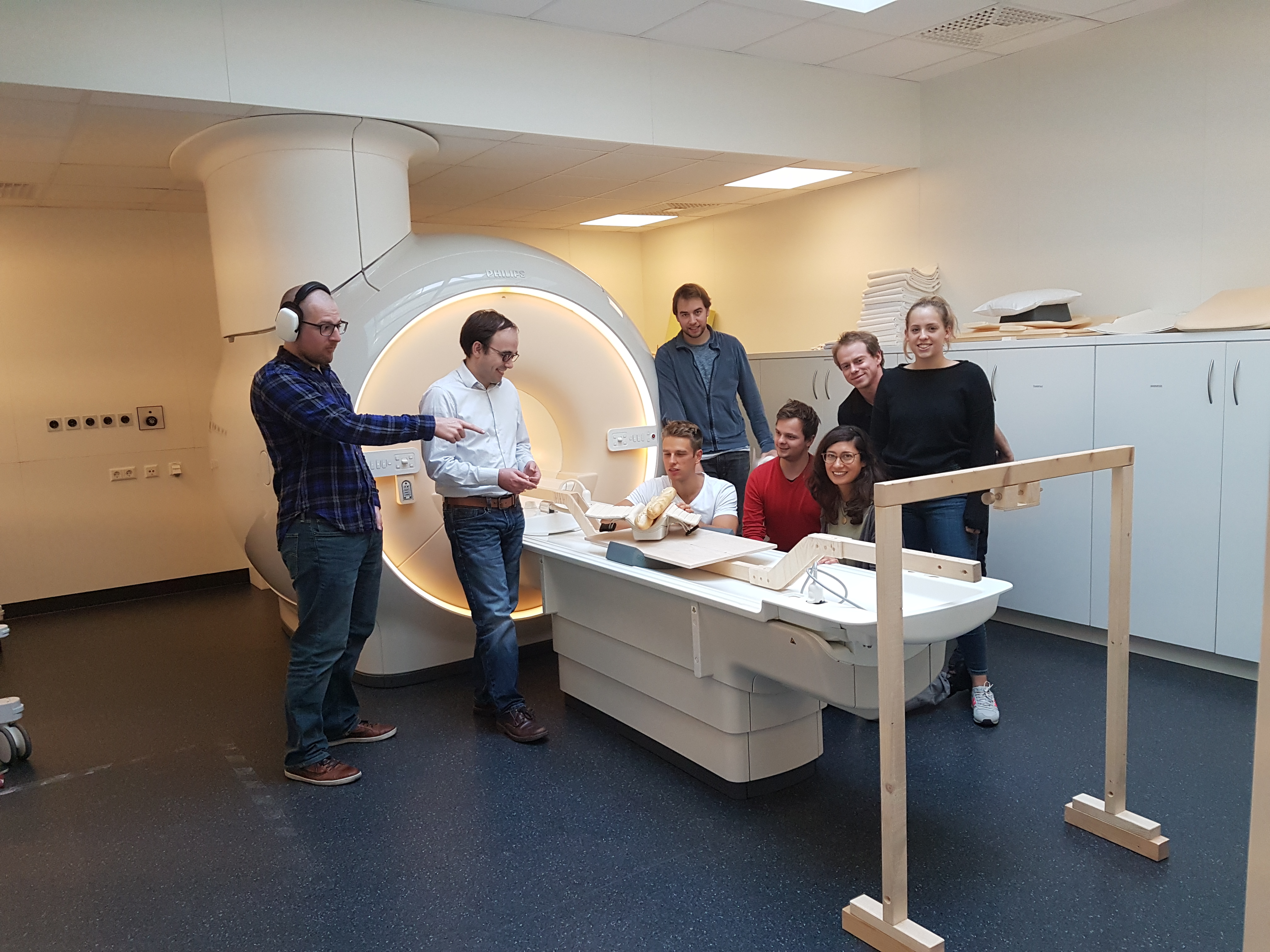 Baguette scanning with the Body Magnetic Resonance Group at TUM

Jessica: Why don’t you change all of your parameters simultaneously and model them together?

Michael: That is an interesting question that at least one of the reviewers pointed out in the review process, which made us look into that a bit more. It could save time, but our simulations showed that to get a reliable fit with the additional unknowns you would need such high b-values that you would face SNR issues and need longer scan times to overcome hardware limits. So we figured that it wasn’t very practical to do.

Dimitris: That was one point that we didn’t explicitly think about, and the review process helped us realize the potential advantage of what we did without knowing it in advance. The review process was not easy on this paper, but it really helped improve it a lot.

Jessica: That is encouraging to hear for some of us!