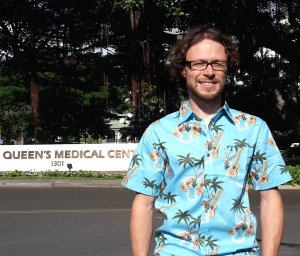 For a second week in a row, we report on exciting new work from Hawaii. This time we spoke with Michael Herbst and Thomas Ernst about the importance of motion correction. As they say: the patients that need a scan the most are those that move the most.

MRMH: Can you tell us about yourself and your background?

Michael: My academic training was in Electrical Engineering. I’m originally from Germany, where I did a PhD in the group of Jürgen Hennig. After my PhD, I received a stipend for a two-year postdoc position with Thomas Ernst’s group. I’ve been here for a year and a half.

MRMH: It seems that there is a dedicated airbridge from Hennig’s group to Hawaii. Thomas, you seem to have started this bridge?

Thomas: Yes. I also did a PhD with Hennig a long time ago. After that, I did a postdoc in Pasadena, some research at Caltech for a while and then became faculty at UCLA. I’ve been at the University of Hawaii for 10 years or so. Most of my early work was on proton spectroscopy, but over the past 5-7 years I’ve worked on motion correction, using an external tracking system for head movements. That’s where a lot of this work originated from.

MRMH: Can you give us a brief overview of your paper?

Michael: Our goal was to apply prospective motion correction to high-resolution diffusion-weighted imaging. We used an approach called MUSE for image reconstruction. This method combines the coil sensitivity with the phase error resulting from diffusion weighting. From that, we were able to reconstruct artifact-free images.

MRMH: What does ‘prospective’ mean?

Michael: Prospective embodies a concept where a camera is placed in the scanner bore to track the patient movements in real-time (about 50 frames per second). The movements of the subject captured by the camera are then fed back to the scanner and the images are corrected on the fly. So ‘prospective’ actually means ‘real-time’.

MRMH: How easily can this technique be applied by other groups?

Michael: It is relatively easy to apply in the current setting. The software is consistently effective and very accurate. If you want to apply it to a new sequence, it will need a bit of programming work. The sequence source code is required for modification, but starting there, it could be done easily.

Thomas: At this point, the camera and the tracking system are available and installed in approximately a dozen sites worldwide. It is quite easy to install and to use the tracking system on a new machine. The only limitation being, that sequences are currently available for Siemens systems only.

MRMH: Your paper talks about head motion. Can your developments be applied to other body structures?

Michael: At this time we are focusing on ‘rigid-body’ motions. We applied it mainly to the brain, but we do have one other paper where we discussed this application on the knee, which can be considered as a relatively ‘rigid-body’.

MRMH: What is the idea for the long run? Do you plan to make a product from all that?

Michael: It is a little bit unclear at the moment since most of the codes in the library are based on Siemens code, which is proprietary information. With that we could not give out the codes ourselves. In the long run, we would like Siemens, or other manufacturers, to sell our software as a package. The only thing that has already been commercialized is the camera and the tracking system.

MRMH: Of the twelve sites in which the system is installed, are there any clinical sites?

Michael: We don’t have FDA approval for the system. It is purely used for research at this time.

MRMH: Where would you like to take this work in the near future?

Michael: Concerning the scientific aspect of prospective motion correction, I think we are pretty much done. We need to work with manufacturers to see how they plan to invest and commercialize this application.

Thomas: We see more and more high-resolution acquisitions of structural and diffusion MRI, up to 0.3 mm isotropic, and it is very difficult for anyone to hold still during a 10-min scan to allow for nice images at that resolution. So it is extremely important to continue to develop motion correction approaches for these applications, especially because it is the patients who move the most that need the scan the most. My vision for the future is to make this system available to clinics where upon the purchase of a scanner system, buyers can just check an option to purchase this prospective motion correction as an additional package.

MRMH: It seems that a lot of excellent work comes from Hawaii. How do you do it?

Michael: Even though Hawaii is pretty far away, the MR community is very well-connected and it is easy to stay in contact with other researchers and experts around the world.

Thomas: People are happy to do a post-doc here because it gives them a chance to stay in Hawaii for a few years. We receive many visiting researchers and there are many opportunities to do good work and to keep the momentum going.