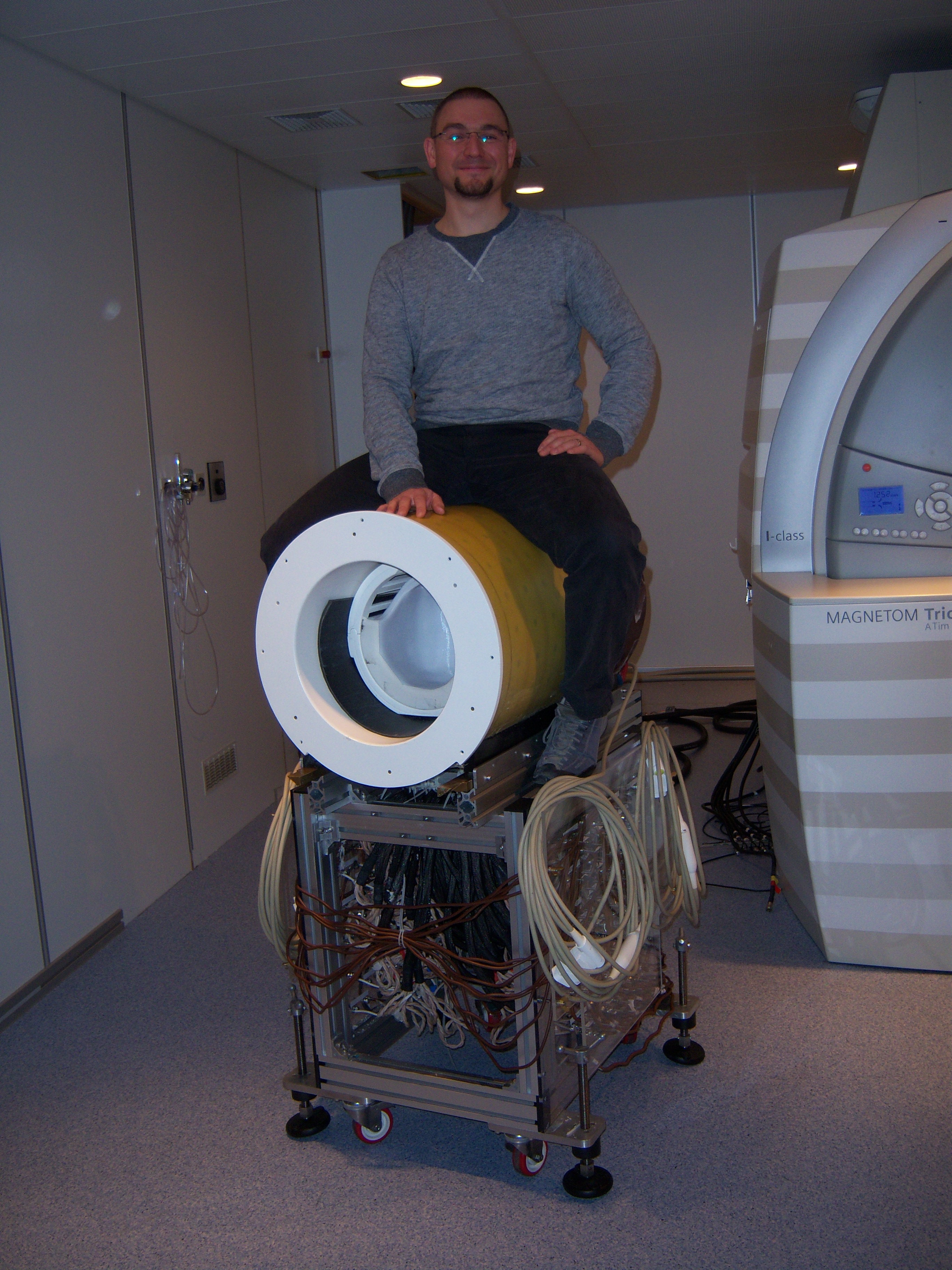 Having spent over a decade developing MR hardware, the Zaitsev group in Freiburg has tried their hand at “basically everything but the magnet itself.” Lacking the Big Budget of industry, they favor a different approach to innovation: creating “strange things” with the “means at hand.” Sebastian and Maxim here discuss one of the fruits of this design philosophy: their 84-channel gradient system.

MRMH: Could you tell us how this project came about?

Sebastian: The parallel imaging technique with localized gradients (PatLoc) was developed in a previous project. This was based on nonlinear encoding fields and it demonstrated that many things you can do with RF (not everything, but a lot) are also possible in the gradient domain. In the meantime, Christoph Juchem published his multi-coil approach. So, the idea came about to build a gradient system that would basically generate any kind of encoding field we could possibly wish for a big playground to test new methods and to try out new things.

MRMH: Let’s get the obvious question out of the way: Why an 84-channel gradient coil? The standard “x,y,z” gradients aren’t enough?

Sebastian: Our aim is really to think in new ways about system architecture, especially the gradient coils – when you begin thinking about them in a different way, new possibilities open up. As for the specific design choices, such as the number of channels, many were based on an analysis by our co-author Feng Jia. The length was chosen to match the dimensions of a whole-body gradient system; however, were we to build it again we would probably make it a bit shorter.

Maxim: Currently, the 84 elements of the coil are arranged in 12 radial segments and 7 rings, and I think we could probably do with 5 rings instead of 7. But in the interest of time you can’t simulate everything from beginning to end; you have to make some educated guesses, build what seems reasonable, and move on with the realisation!

Sebastian: Like always in science, you’ve got to start somewhere. And once you’ve cast the coil in epoxy you have to live with what you’ve created!

Perhaps it’s often the case when developing technologies that you have to overdo something before later returning to a reduced form. If you look, for example, at parallel transmit, this started out using many channels, but what’s now standard on 3T Siemens scanners is a dual-channel parallel transmit option. I would guess that’s probably not something people would have expected ten years back. So you may have to go beyond and then bring things back in a somewhat reduced form.

Maxim: Beyond that which seems to be reasonable! We’re trying to shake the established concepts. People are comfortable with Fourier transforms, and everybody likes to think of the standard gradients as being linear – but they’re not! Put a larger object into the scanner and switch off the built-in distortion correction – you’ll see just how nonlinear the so-called linear gradients are! Sometimes rather than trying to get rid of every imperfection, you might be better off accepting some – and even trying to use them. It’s a “standard” innovation approach in MRI: you observe an artifact and try to think of how to make it useful, how to turn it into a new method, a new contrast, or a new encoding principle in our case. 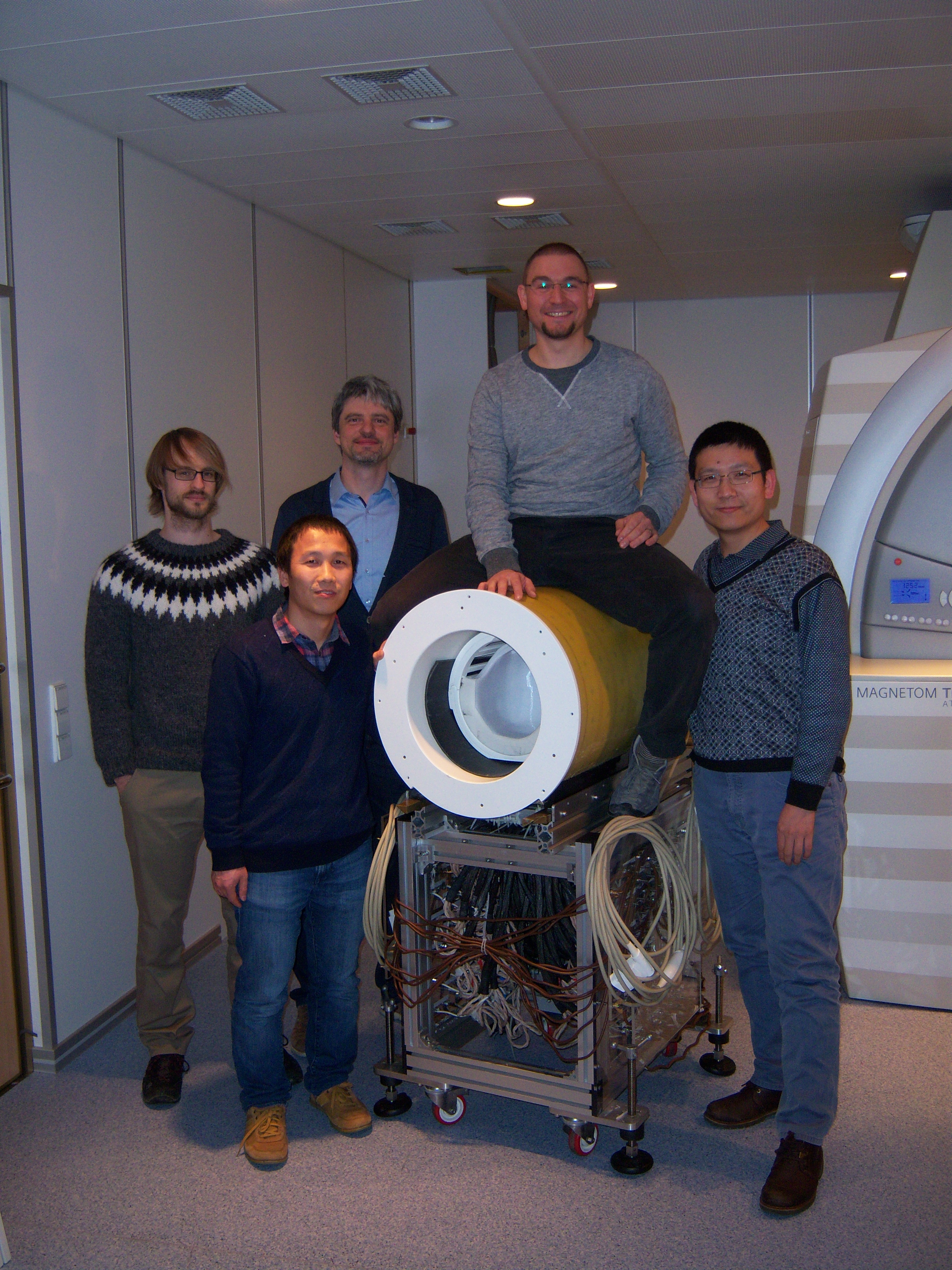 MRMH: Was the original design created anticipating that you’d only be using 12 amplifiers to drive the 84 coils?

Sebastian: Originally it was conceived as having independent channels. To be honest, 12 high-current amplifiers were all we could afford in the grant! But the aim was really to have many degrees of freedom, and by having a reasonably low inductance per element, we can interconnect elements to form clustered channels, each driven by an individual amplifier. There’s an IEEE paper from our co-author Stefan Kroboth on how to optimally combine the channels to reduce the number of amplifiers needed.

Sebastian: Sounds simple but it’s actually a lot of work! You have 84 x 2 = 168 screw terminals that have to withstand 150 A at 350 V, so you have to be a bit careful to interconnect them. It takes about half a day to set up a new cluster, so it’s time consuming, but for the experiments we’ve been doing so far, the clustering approach has been working quite well.

Maxim: We’ve also built and tested an electronic switch. Then there was an unfortunate incident where we lost it in a cloud of stinky smoke… One has to be prepared for such events when dealing with hardware development. So, for now everything is fairly manual and limited by the financial side of things; but our vision is that one day we will converge to a lower number of channels, which can then be powered by some lower number of amplifiers, with individual elements electronically switched on/off as needed for a specific application.

MRMH: What else have you done since publication?

Sebastian: At last year’s ISMRM I presented this idea to use the matrix gradient coil for novel ways of doing simultaneous multi-slice: e.g. normally, to separate signals from multiple slices they’re shifted along the phase-encoding direction; but if we instead apply a field that doesn’t have a gradient anymore but just a different constant offset for each of the slices, by playing this out during read-out, you can shift the signals into their own frequency bands. That’s just one example of something new, which was impossible before, now becoming possible by this coil. We’re also thinking about implementing curved slice acquisition – something which has already been demonstrated on a PatLoc coil by a former colleague Hans Weber – but, with the matrix coil at hand, new degrees of freedom are waiting to be explored.

Maxim: We also had some ideas to do dynamic shimming within the slice. We published a paper already using it with the PatLoc coil, so we could certainly use it with the new matrix coil but, again, more amplifiers would be an advantage there…

Maxim: Yeah, we have a long list of to-dos for that coil but we’re currently four people on the project and we have like ten ideas we could follow. 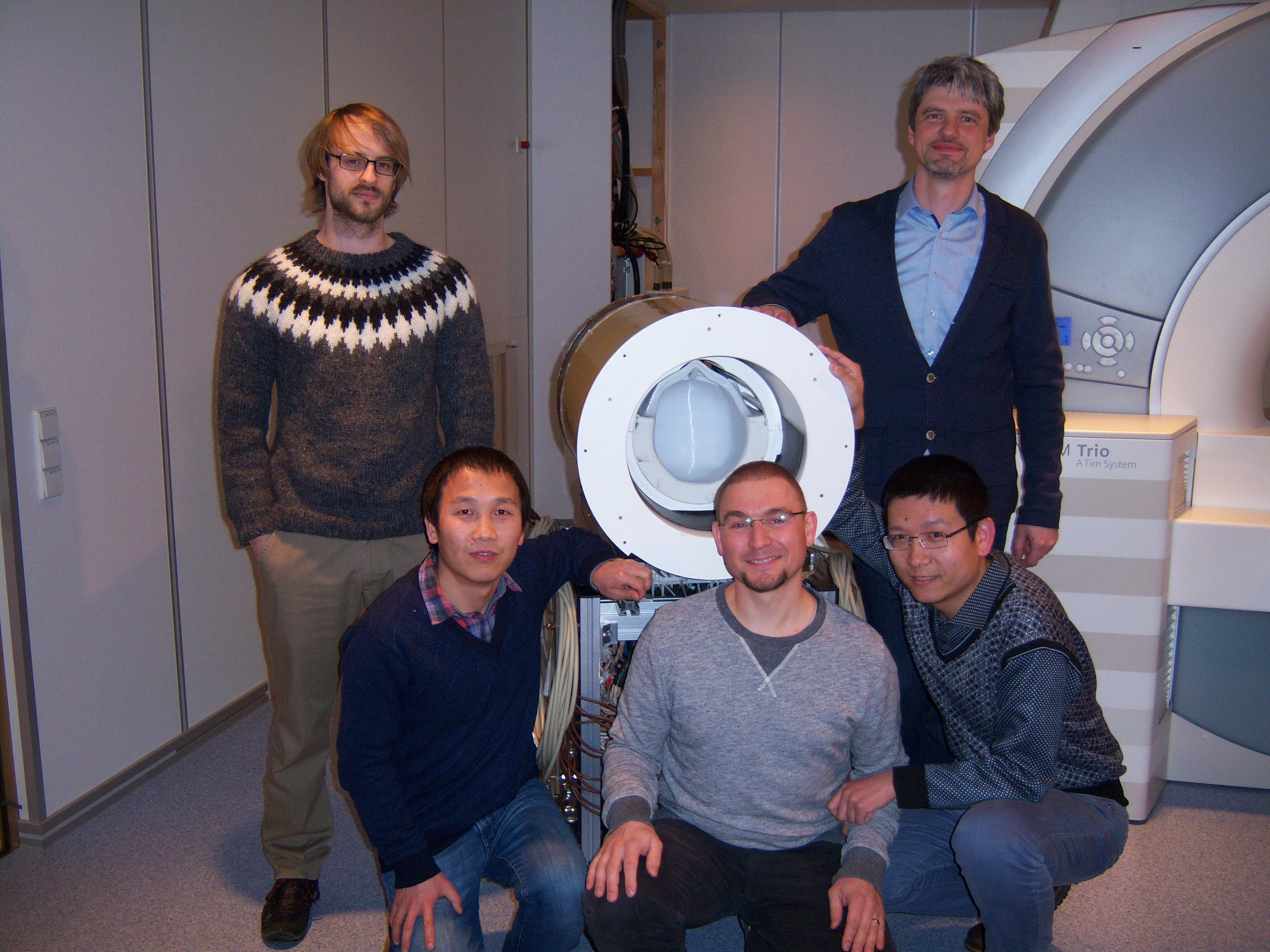 MRMH: We could use this Highlights feature as a recruitment announcement.

Maxim: Sounds like a great idea! We have other exciting projects coming up around gradient and shim design: one is the optimized shimming coil with Klaus Scheffler in Tübingen; another is to build a local gradient coil for mammography, specifically for diffusion-weighting in the female breast. We’re aiming at very high gradient strengths, well above half-a-Tesla per metre. We also have interesting industry collaborations coming up, related to gradients and system design.

Sebastian: If a day only had 48 hours…

Maxim: We’d still have much to do!