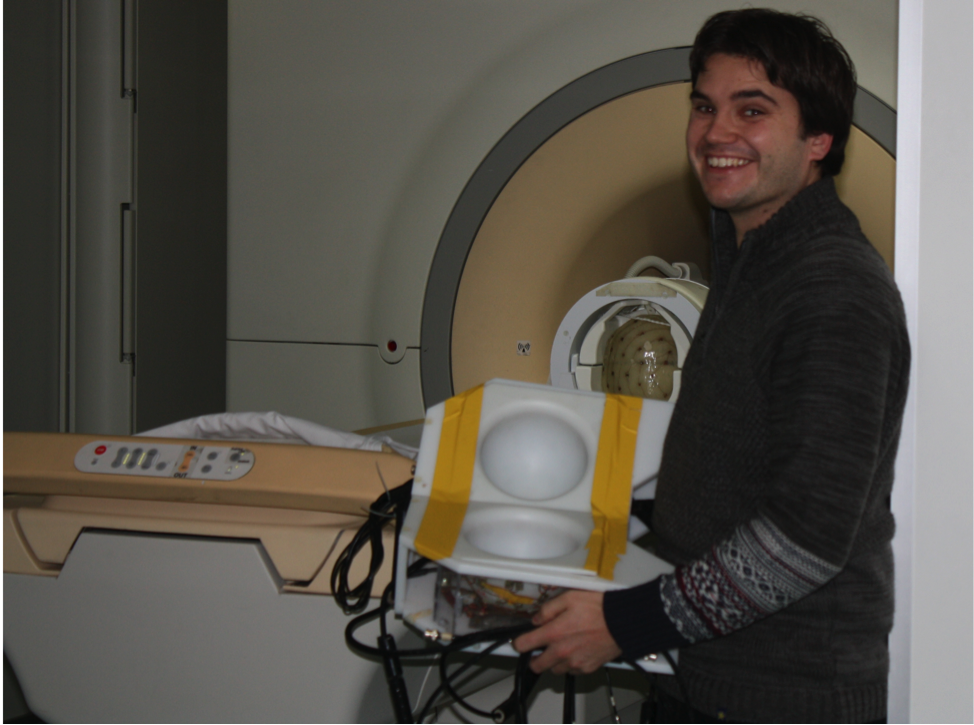 Tijl and Dennis are scientists at Utrecht University and their paper on bilateral breast imaging and phosphorous spectroscopy is our Editor’s Pick for the month of December. The paper presents a unique bilateral coil array that allows them to acquire both 31P spectroscopic imaging and 1H high-resolution imaging in a single session. Their novel design included quadrature transmit coils and used a floating loop to achieve decoupling at the resonant frequencies of both phosphorous and hydrogen. We discussed their path in MRI research and the features and significance of this work.

MRMH: Can you tell us a little bit about your background and how you got into MRI?

Tijl: I started out with a bachelor’s in computer science and continued in the biomedical sciences. For my research, I first worked on a project involving the imaging of the carotid artery, also at 7T. Somehow I ended up in work that led to this article. So it was a bit of a curvy path. I am 3 years into my PhD, and expect to finish in about one year.

Dennis: You could say I am a hobbyist. I worked on a team in Nijmegen where I actually learned all of the metabolic imaging features. Before that I worked with Philips in MR engineering. I really believe in metabolic imaging – that it can be helpful for many treatment decisions – but needs SNR. So, I moved from Nijmegen and searched for a location where they actually had some high fields, and ended up in Utrecht.

MRMH: Are you currently at a hospital? What is the level of integration between your group and the clinical infrastructure?

Dennis: We are in the radiology department of the hospital. We have a quite large research group, which we call the Center of Image Science, with about 150 PhDs and post-docs that all work with MR within the institute and are completely embedded within the university hospital.

MRMH: What is the motivation for this work?

Tijl: In particular we want to take a look at the response to chemotherapy. Some preclinical data show that phosphorus spectroscopy could already differentiate respondents from non-respondents to chemotherapy after one session of chemo. Early in the treatment you could decide whether or not you should continue with the chemo. Look at the burden of chemotherapy for the patient and the costs of the treatment. I think phosphorus spectroscopy can really make a difference, especially combining it with proton imaging and the main clinical workhorse – dynamic contrast enhanced series. 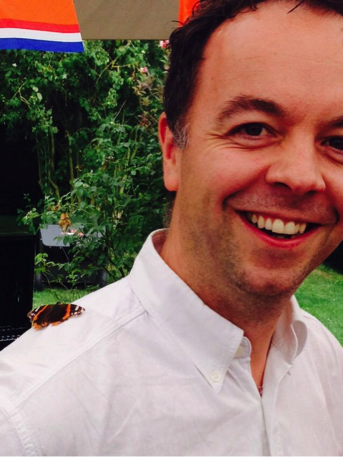 Dennis and a small, winged friendly.

Dennis: With that workhorse, you look mainly at morphology, which starts to alter halfway through treatment, or even at the end of the treatment. Metabolism could be a much faster change, and therefore you could change the treatment in the early phase. Having hydrogen MRI in place, while being able to image both breasts at once, conventional clinical decision-making can be combined with research, which makes life easier both for the radiologist and for the patient.

MRMH: Tell us a little bit about the commercialization. Is this coil available now?

Dennis: We have a little spin-off company called MR Coils. The whole idea for that is that it’s easy for us to ship those hardware components to other research sites. If you do this through the hospital it is very complicated… too many lawyers involved. We have shipped a few of those to other sites and we are continuing to improve on the design.

MRMH: Would it be possible to scale your work to 3T?

Tijl: Moving to 3T for phosphorus is difficult because of the loss in SNR you have…

MRMH: So, in a way you could advertise this as a killer app for 7T.

Dennis: You can quote that – it is a good one! Even at 7T we still lack sensitivity. We always want more because our voxels are still quite large, so we still can only include substantial tumor sizes. And particularly deeper in the body, it will be challenging.

MRMH: Would you be interested in going to even higher fields?

Dennis: Of course! As research moves on we see, from the University of Minnesota actually, that at 10.5 Tesla the SNR increase is beyond linear. I think that is the driving force to go to even higher fields in the near future. But first let’s find some funding!

MRMH: What was the main design challenge?

Tijl: The phosphorous frequency was hard to decouple between the left and the right sides.

MRMH: Why is it so important to decouple the coils?

Tijl: We basically have two coils, one for the left breast and one for the right. We want to avoid, say, cross talk between the coils, so that one coil will not influence the other. The way that the coils influence each other is different between the phosphorous frequency and the proton frequency.

Dennis: The coupling between proton and phosphorous is different even though the setups are identical because of the dielectric patterns in the human body. There are a couple of parameters: the size of the loop, the location of the loop, and the frequency of that loop. Those are the three variables you can play with. We did make sure the decouple-loop was not exactly on resonance because if it were, then you would get very high current, and you can even have the local field change.

MRMH: What else keeps you busy these days?

Tijl: We are working on gradient coils, also for breast. It is very early work still, but it is a fun project to work on.

Dennis: At 7T the challenges more than double, so we are investing in the gradient inserts for more gradient power and faster readout trains to utilize the performance of diffusion MRI at higher fields.