The ISMRM Challenge (http://challenge.ismrm.org) is an open competition series that seeks solutions to critical problems in MRI. As described by organizers in a recent publication, the 2015 Challenge focused on radiofrequency (RF) pulse design, with two specific sub-problems. The first was the design of shorter slice-selective parallel transmission (pTx) pulses for ultra-high field MRI, which are necessary for multislice acquisitions with uniform sensitivity and contrast. Before the Challenge, the best slice-selective pTx pulses required users to sacrifice resolution in the slice dimension as well as spectral bandwidth, in order to gain uniform contrast and signal. The Challenge sought to overcome that tradeoff by encouraging contestants to design the shortest possible slice-selective pTx pulses that excited sharp slices with uniform flip angles in-plane. The second problem was the design of shorter multiband refocusing pulses which are required for spin echo simultaneous multislice (SMS) imaging. Before the Challenge, the maximum achievable multiband factor for important spin echo SMS neuroimaging scans was limited by the high SAR of their refocusing pulses, which must simultaneously refocus a large number of slices. The Challenge sought to overcome that problem by encouraging contestants to design the shortest possible multiband refocusing pulses, subject to peak power and SAR constraints.

The 2015 Challenge began in November 2015, and ended just before the 2016 Annual ISMRM Meeting. A total of 13 teams participated from 10 countries. Team StanfordUHF won the pTx sub-challenge with a new approach to spokes pulse design that yielded 10.6 times shorter pulses than conventional methods. Team rfcontrol won the SMS sub-challenge with a new multiband pulse design algorithm that produced 5.1 times shorter pulses than conventional methods. After the competition ended, Challenge organizer Will Grissom interviewed both of the winning teams about their experience with the Challenge and their winning approaches. 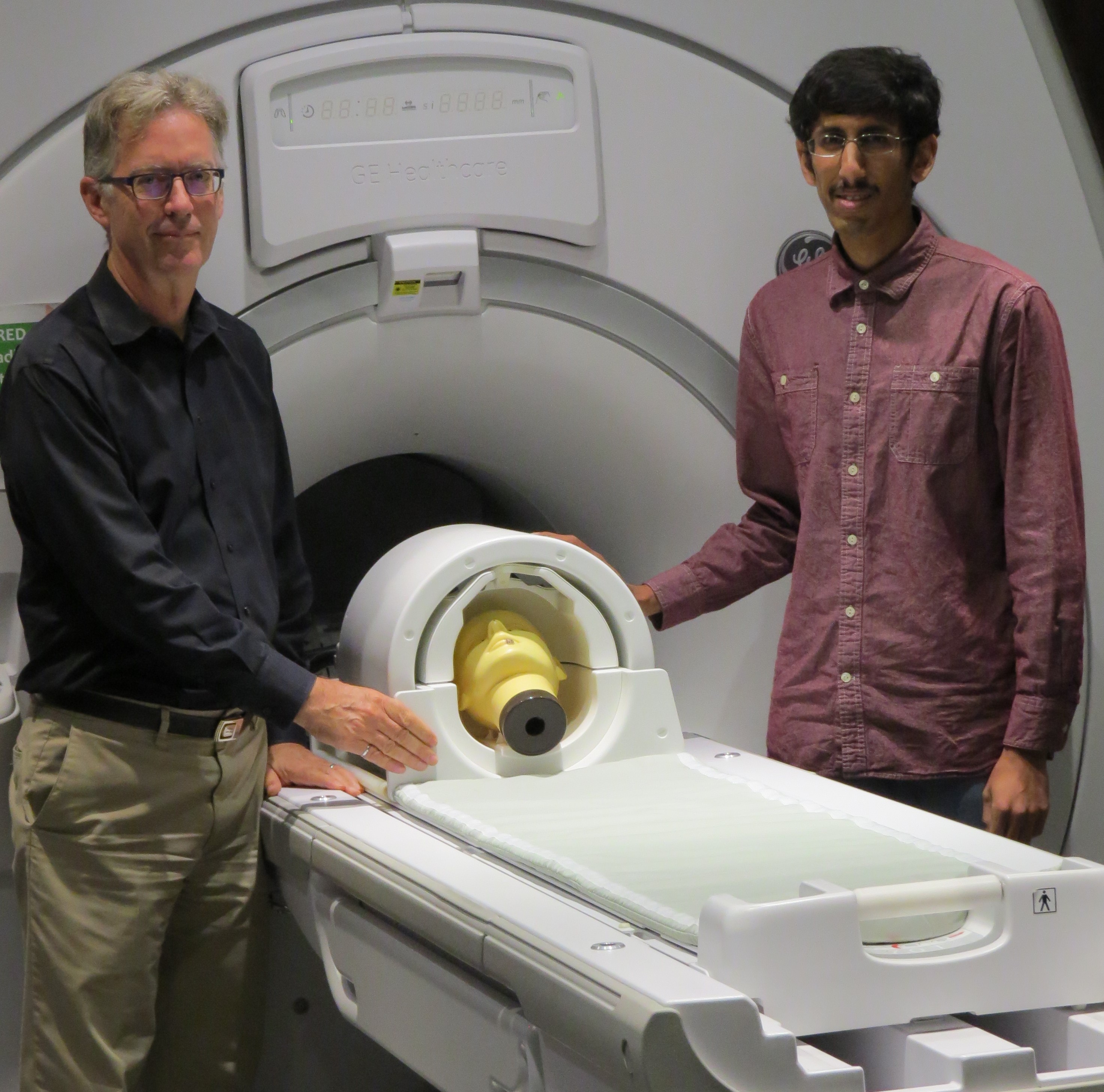 Mihir Pendse won the pTx sub-challenge, competing under team name StanfordUHF. He is a PhD student in Electrical Engineering at Stanford University who works on parallel transmit RF pulse design for ultra-high field MRI, and is supervised by Professor Brian Rutt.

Will: What motivated you to participate in the Challenge?

Mihir: I think this challenge was a good way to compare different pulse design ideas across institutions in a well-organized manner. For me it was a way to assess my own skill in RF pulse design.

Will: How hard was it to get started?

Mihir: It wasn’t hard to get started as the problem description was defined very clearly by the organizers.

Will: Tell us about the design approach you devised, at a high level.

Mihir: The challenge required optimizing the slice profile (or SMS profile), the channel weightings and the spokes locations for in-slice homogeneity. I was able to design the single-slice torso pulses using a straightforward adaptation of my previous minimum-SAR spokes design method (IMPULSE) [1], but the brain SMS designs required me to develop a new approach in which I optimized the subpulse shape for each slice so that the summed power would be minimized, using an optimal control approach adapted from the method of Aigner et al [2]. After that I further adjusted the phase of each slice’s subpulse to minimize the peak amplitude of the summed subpulses, and applied time-optimal variable-rate selective excitation (VERSE) [3,4].

Will: Did your approach evolve during the Challenge as you found ways to improve it, or did it stay fixed and you found improvements through manual adjustments?

Mihir: The approach evolved significantly during the course of the challenge especially for the pTx-SMS tasks as I tried to come up with ways to reduce the peak pulse power in a time-optimal manner. One of the ideas I implemented was to reduce the subpulse durations using minimum rather than linear phase pulses, and I found I was still able to keep the phase roll through the slice flat enough when I did that.

Will: What did you learn from the Challenge, at a high level?

Mihir: While I was fairly comfortable with pTx theory before the challenge, I learned a lot about other aspects of RF pulse design including the design of SMS pulses.

Will: If you were an organizer of the Challenge, what would you have done differently?

Mihir: While the challenge was well organized I think there were several limitations in the design specifications:

Will: What’s next? Did you come up with new ideas that you will further develop and publish, as a result of your participation in the Challenge?

Mihir: Yes, I am in the process of preparing a manuscript on my IMPULSE pTx design methods that I used and extended for the challenge. This first paper will be focused on conventional sequential multislice excitation and will probably be followed by a second paper describing the extension to SMS. I presented early accounts of IMPULSE with sequential and SMS excitations at the 2015 and 2016 ISMRM meetings, respectively [1,5].

Will: What do you think was unique about your approach that gave you an edge over other contestants?

Mihir: I think the ability of my IMPULSE method to mitigate local SAR hotspots is superior to existing methods in the literature as it exploits optimization of both spokes locations and channel weightings even though this makes the problem non-convex. The ADMM algorithm used in IMPULSE is particularly efficient and even allows for optimization using SAR matrices directly without VOP compression, although that wasn’t relevant for this challenge. I think formulating the pTx optimization as minimizing SAR subject to in-plane inhomogeneity constraints rather than minimizing inhomogeneity subject to absolute SAR constraints (as is more typical in the literature) is also advantageous, because instead of needing to specify the slice selective subpulse shape up front (in order to compute the absolute SAR constraint) the slice selective subpulse can be optimized later (after the RF shims and spokes locations have been found) in order to minimize total pulse duration subject to absolute hardware, SAR, and excitation accuracy constraints.

Interview with Armin Rund and Christoph Aigner of team rfcontrol 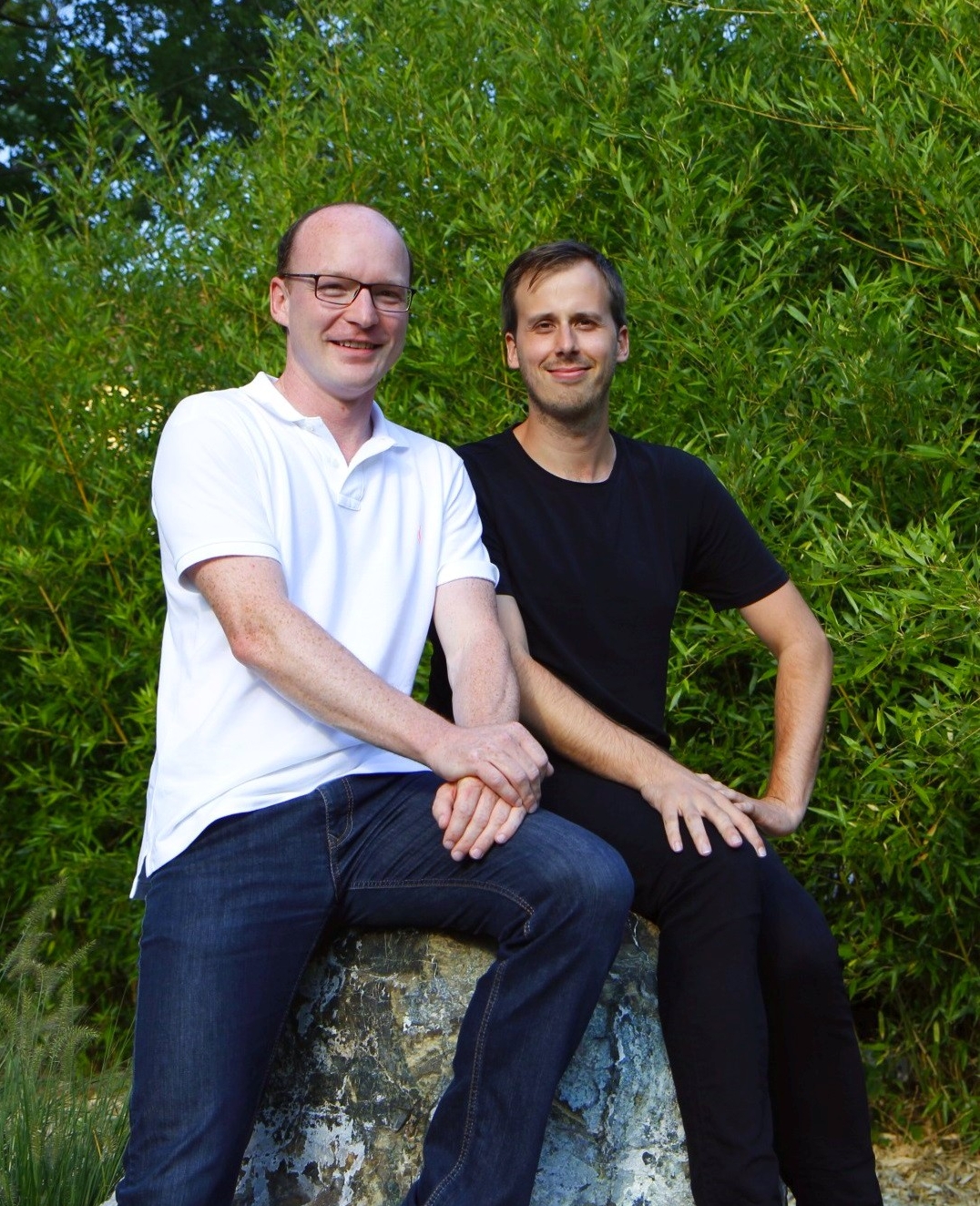 Team rfcontrol won the SMS sub-challenge, and comprises four team members. Armin Rund is a postdoc in applied mathematics working on optimal control of partial differential equations and multiphysics models. He is supervised by team member and Professor Karl Kunisch at the University of Graz, Austria. Team member Christoph Aigner is a PhD student at the Institute of Medical Engineering working on RF pulse design and its applications in MRI. He is supervised by team member and Professor Rudolf Stollberger at the Graz University of Technology, Austria.

Will: What motivated you to participate in the Challenge?

Christoph: Our main motivation was the chance to put our optimal control methods in competition with other approaches, and to test our algorithms on accepted problems.

Will: How hard was it to get started?

Armin: The phase I example code showed that we needed to do a lot. We needed to develop new algorithms; in particular we had to develop a new algorithm for time-optimal control [6] multiband pulse design to obtain the shortest possible pulses, and we needed a global optimization scheme to overcome the non-convexity of the problems. We had done previous work on time-optimal control [7], which helped us get started. We also had to develop techniques to incorporate the l∞-norm constraints that were enforced in the challenge, whereas in our previous work we had only used quadratic regularization [2].

Will: Tell us about the design approach you devised, at a high level.

Armin: We came up with a new approach that was built using our existing building-block optimization codes that implement semi-smooth Newton and quasi-Newton methods. As mentioned, we implemented a time-optimal control design, along with a new strategy for globalization based on an auxiliary optimization problem. We implemented l∞-norm constraints on refocusing efficiency error, RF amplitude, and the gradient amplitude and slew rate. We also found that using complex RF modulation did not significantly reduce our pulse durations, so all our designs were real-valued.

Will: Did your approach evolve during the Challenge as you found ways to improve it, or did it stay fixed and you found improvements through manual adjustments?

Christoph: We recognized early on that we should use a time-optimal control approach, but it evolved quite a lot, particularly in phase I as we tested different sub-algorithms. Of course we also made a lot of adjustments to the algorithm parameters along the way. We had to put our code on a diet for phase II, by optimizing and parallelizing our code to cope with the larger number of design problems in phase II. The overall algorithm is structured so that the longer you let it run, the shorter the pulse gets. Early in the challenge we let it run for weeks; by the end of phase II we could get the same answer in a day using our optimized codes.

Will: What did you learn from the Challenge, at a high level?

Armin: Most importantly, we learned interdisciplinary collaboration can lead to ground-breaking research. We successfully combined my basic research in applied math with the challenging application in biomedical engineering that Christoph is working on. 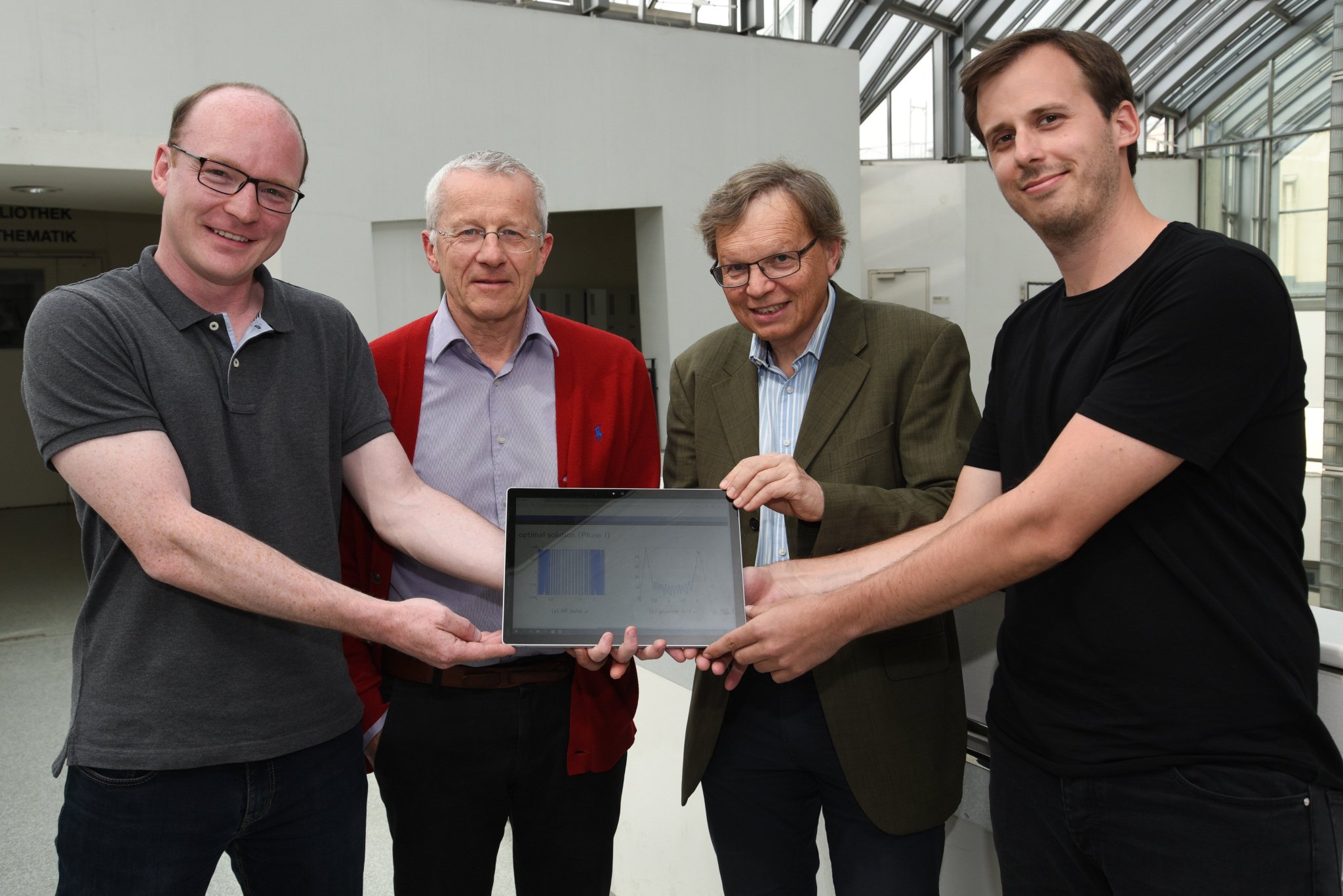 Left to right: Armin Rund, Karl Kunisch, Rudolf Stollberger, and Christoph Aigner, with a display of their winning SMS pulses.

Will: If you were an organizer of the Challenge, what would you have done differently?

Christoph: It would have been nice to have a dedicated scientific or poster session during the ISMRM meeting in Singapore, to give contestants a forum to present and share their ideas and approaches. The whole society could benefit from such an event to connect participants and exchange ideas.

Will: What’s next? Did you come up with new ideas that you will further develop and publish, as a result of your participation in the Challenge?

Christoph: Our next step is to publish a paper on our constrained and globalized time-optimal control method, and to present the new techniques we developed for the challenge such as the globalization steps. We may start new collaborations and address more complex questions such as designing more robust inversion pulses or use more complete MR equations such as Bloch-McConnell. We would also like to try initializing our algorithm with existing low-peak power complex-valued solutions.

Will: What do you think was unique about your approach that gave you an edge over other contestants?

Armin: The detailed modeling of the problem set as constrained optimal control problem and its accurate solution using iterative mathematical optimization techniques allowed us to reduce the pulse duration maximally by fully exploiting the constraints. The new globalization techniques we developed also helped to improve our scores.