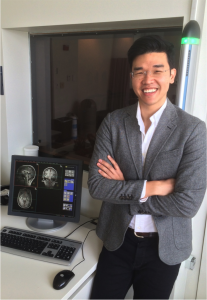 Kawin Setsompop is assistant professor of radiology at Harvard Medical School and author of the most cited Magn Reson Med paper for 2012, entitled Blipped-controlled aliasing in parallel imaging for simultaneous multislice echo planar imaging with reduced g-factor penalty. He is also the guest editor of the recent Magn Reson Med virtual issue on simultaneous multi-slice (SMS) imaging and co-chair of the ISMRM workshop on SMS that was held in Asilomar this summer. We sat down with Kawin to discuss his contributions to SMS imaging, his vision for the future of MRI, and his life outside of the laboratory.

MRMH: Tell us a little bit about your background and what got you interested in MRI?

Kawin: I started off doing engineering as an undergrad at Oxford. I didn’t really know what I wanted to do after that, but I had a general sense that I wanted to do something related to healthcare or health science. I went to MIT for grad school, where my PhD adviser, Dr. Elfar Adalsteinsson, was very passionate about MRI acquisition research. He was a great mentor for me, and let us really experiment with different ideas, which was fun. I also liked the interdisciplinary nature of MRI research where you interact with physicists, software and hardware engineers, as well as neuroscientists and clinicians.

MRMH: Your work on SMS has been widely cited and used in laboratories and clinics around the world. Could you tell us about the origin of SMS and explain the concept to the uninitiated?

Kawin: Conventional 2-D MRI acquires one imaging slice at a time, encodes that, and then moves on to the next slice and so forth to acquire the whole volume.  Simultaneous multi slice, as the name suggests, tries to acquire and encode multiple slices simultaneously. This allows you to get imaging faster as well as improve SNR efficiency. People developed various methods in the 80s and 90s to do this, but the method that has really taken off is based on parallel imaging simultaneous multi slice that was first developed by David Larkman at Imperial College in London in the early 2000s. Our lab and various others have built and refined these techniques, and in the last few years we’ve been able to acquire up to 10 slices or more simultaneously. One of the main challenges in developing SMS has to do with getting good training data to train parallel imaging algorithms. The last four or five years have seen tremendous advances in creating robust algorithms for parallel imaging reconstruction, and we have been very successful in adapting these for EPI-based acquisitions used in fMRI and diffusion. We are now working on adapting our acquisitions and algorithms to structural and perfusion imaging, and the next big challenge will be to apply our methods on clinical brain and body applications.

MRMH: How easy is it for a new site to start using the technique?

Kawin: As with any new method, it is important to know the limitations of the technique. For example, if you have an eight-channel coil you should not try to acquire eight slices simultaneously, you are better off settling on two to three. Otherwise, the method is pretty straightforward and there are quite a few robust sequences that are available from various sites, such as our lab and the Minnesota group. As we speak, the MR vendors are working on developing product sequences based on our joint efforts.

MRMH: Where has SMS seen most widespread usage so far?

Kawin: SMS for fMRI and diffusion has been an integral part of the Human Connectome project, and over a thousand subjects have already been scanned. We are also starting to see SMS used in clinical diffusion scans. Q-ball imaging with high angular sampling can now be accomplished in 2 to 3 minutes, making it particularly attractive for sites that want to go beyond conventional DTI acquisitions.

MRMH: The ISMRM workshop on Simultaneous Multi-Slice imaging was held this summer in Asilomar, California. How did it go and what were the notable highlights?

Kawin: This was the first workshop of its kind, and it was an unqualified success. There were over 100 participants, mainly researchers who are doing development, but also a significant number of people interested in fMRI and diffusion applications, as well as clinical imaging. The workshop is a culmination of the efforts of a few established labs that have worked on these methods over the last 5 to 10 years, but it is also nice to see new labs that are starting to get interested and contributing to the growth of the field. Asilomar was a great venue and the natural setting provided a space where people could run into each other frequently and discuss science. There was also a great hands-on workshop organized by Steen Moeller, Felix Breuer, Rita Nunes and myself, where we shared our Matlab code and encouraged people to take that home with them and develop it further. Another personal highlight was the talk by Erwin Hahn, one of the pioneers of MRI research, who also happened to be the adviser of my postdoctoral adviser, Larry Wald. He provided the glue for the workshop, recounting the history while also providing a unique perspective of the field.

MRMH: Who is Kawin when not doing MRI?

Kawin: It’s hard for me to think of an answer to that because I’ve been working so much the last few years that MRI is really an integral part of my life. I have a background where I travel a lot. I grew up in Thailand and then I went to boarding school in New Zealand and then I did my undergrad in England and now I’ve moved to Boston, and this job allows me to continue traveling and experience different cultures. And being Thai I really like Thai food, as well as other types of cuisine. I like to taste different foods and I like to cook a lot.

MRMH: Now that you mentioned Thailand, it is probably a good time to say a little bit about your outreach work there.

Kawin: In 2011 I participated in an ISMRM outreach program in Macedonia, and it felt really good to be part of an initiative that brings together scientists, MDs and researchers from developing countries that do not regularly attend the annual ISMRM meetings. That is when I decided to organize something similar in Thailand. In Thailand, we have excellent equipment and a lot of medical tourism, but there’s not a lot of MRI research going on yet. I really want to bridge this gap, so I organized a workshop where we managed to get people excited about MR research. For example, Larry Wald has these cute little 0.2 T Tabletop MRI scanners, and we are sending one to Thailand so they can experiment with the hardware and software without using precious clinical scan time. I look forward to organizing another outreach seminar there.

MRMH: What is your vision for MRI and what do you see happening in the next 10 years? Where do you see the field going and what excites you the most?

Kawin: There is always this bounce back and forth between hardware and software development. Now that we have multiple channel receivers, multiple channel transmit, we’re starting to see a lot of development in terms of strong gradients as well as local B0 shimming that would allow us to do non-linear encoding. I foresee a closer interaction between hardware and acquisition and reconstruction software that results in more channels, more sensors, and more non-linear reconstructions. I am also excited by the prospect of using these novel acquisitions to explore new contrast mechanisms and characterize tissue microstructure. In particular, I think the brain is a really exciting research problem because of its complex structure, and I hope that as we gain temporal and spatial sensitivity we will get closer to figuring out its mystery.

MRMH: Where do you see yourself in 10 years?

Kawin: Hopefully in 10 years I will still be as excited to wake up in the morning and work on MRI. I am a nerd at heart and I really like working with people, tinkering with the ideas on a daily basis and coming up with cool stuff. I also hope to use my experience to mentor the next generation of scientists, getting them really excited about MRI research and pushing their new ideas forward. Finally, I am hopeful that by that time I will be able to look back and see some of this technology have an impact on health care and health science, because that is the most important thing in the end.